Girl (8) ‘so happy’ as missing assistance dogs are found 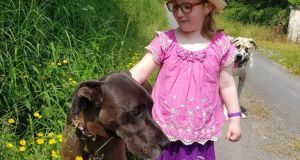 File image of Brianna Lynch and her Great Danes.

There was great news for Great Dane owner Brianna Lynch (8) after her two assistance dogs were returned to her Co Clare home after being missing for almost a week.

The schoolgirl from Killaloe, who has epilepsy and autism spectrum disorder, made national and international headlines five years ago when her family realised her Great Dane Charlie was able to detect the onset of one of her epileptic seizures a full 20 minutes before it began.

When the dog detected that she was about to have a seizure as she slept, he was able to keep her pressed gently against a wall until someone came to her aid.

In 2016, Charlie died aged five, leaving Brianna and her family heartbroken. Things started to get back on track when a Great Dane called Walter and then a second, younger one called Willie came into their home.

However, the dogs went missing during a storm which hit the west coast last Wednesday and the child was so upset at their disappearance that her seizures intensified. She had four serious episodes on Sunday and Monday having been largely seizure-free for almost two months.

“We live in a very remote house on the side of a mountain and the dogs have the run of the place. They like to sleep in the hay shed where it is nice and warm and that is where we just presumed they were during the storm,” her mother Arabella Scanlan said.

As time passed, the family grew more certain the dogs had been stolen.

“They are just so good-natured. And while they are big dogs they are not fierce. The black dog would cower if anyone came near him and the harlequin would be really friendly.”

Ms Scanlan said Willie was always at her daughter’s side.

“He would never just go off. I have been to all the neighbours and to the guards and on Facebook and I don’t know what else to do,” she added.

On Monday night, several hours after the story of their disappearance was published on The Irish Times website, the dogs turned up at the gate of the family’s home.

Ms Scanlan said she had no idea who had returned the dogs but said both had made it home “healthy and unharmed”.

She said her daughter “got such a fright when she saw them that she had a bad seizure with the excitement but is still so happy. This has really mixed her up but, safe to say, we will all sleep well tonight”. 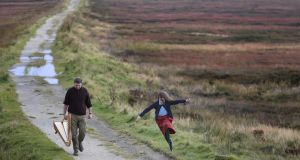