Seized cigarettes, branded ‘Mayfair’ and ‘Richmond’, have a retail value of €4 million 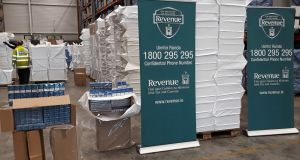 The cigarettes were discovered with the assistance of Revenue’s mobile x-ray scanner. Photograph: Revenue

Revenue officers have seized over eight million cigarettes which were being smuggled into Dublin Port in a lorry.

The cigarettes were discovered last Friday with the assistance of Revenue’s mobile x-ray scanner when officers conducted an examination of freight, which arrived into Dublin from Rotterdam.

The seized cigarettes, branded “Mayfair” and “Richmond”, have a retail value of almost €4 million, representing a potential loss to the Exchequer of approximately €3.3 million, Revenue said.

The foreign-registered truck in which the cigarettes arrived was also seized and the driver, a man in his 20s, was questioned.