Teacher learnt of college closure on his wedding day

‘I was trying to ignore it all. But it is really hitting home now,’ says Robert Dunlop 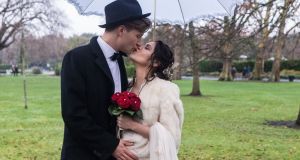 Robert Dunlop and his wife Gisela after their wedding on Saturday in Dublin. Photograph: Courtessy of Robert Dunlop

Having exchanged wedding vows with his partner Gisela at the Unitarian Church on Dublin’s St Stephen’s Green on Saturday, Robert Dunlop noticed dozens of new messages showing up on his phone.

Assuming that they were from family and friends who could not attend the wedding rather than anything work-related, he took a moment to scan them.

The contents were far from the well wishes for the life ahead of them — the couple are also expecting their first child later this month — it was a bleak stream of panicked texts from his fellow teachers at Grafton College, who found out they had not been paid a day earlier and were, in all likelihood, out of work.

“Then we walked across the Green to a little French restaurant Chez Max on Baggot Street, and we had our reception there,” Dunlop says. “I was trying to ignore it all and not pay attention to the reality. It was tough. But it is really hitting home now.”

The 33-year-old English teacher, who is from Stepaside but lives in Portobello, close to where he has been teaching overseas language students since April, said he does not know how he and Gisela will get through the run-up to Christmas and the imminent arrival of their baby.

Rather than returning to his classes on Monday, Dunlop was going to check what welfare payments he was entitled to before the hunt for a new job got underway.

“But obviously there is going to be lots of competition, because all the teachers here are going to be looking for work,” he says.

While all 23 teachers and five administrative staff were told they would not be getting their salaries from November — due to be paid last Friday — Dunlop expects he could be left out of pocket on the double.

“I was saving last month’s paycheck for after the wedding, so I wouldn’t dip into it,” he says. “I’ll be trying to cash it now, but it is in the lap of the gods as to whether it comes in. If not, I’m two months out of pay.”

Dunlop says he is struggling to get his head around the situation he and his new wife now find themselves in, despite being “as frugal as possible” with their wedding planning.

“All the savings we could have made is nothing compared to the two months of pay,” he says. “I still haven’t processed it. I can’t even bring myself to think about the financial implications yet.”