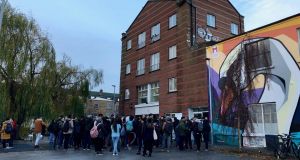 More than 100 international students gathered on the banks of the Grand Canal at Portobello Bridge in south Dublin on Monday morning after discovering their English-language classes at nearby Grafton College had been cancelled.

The decision to cancel classes came after teachers at the school discovered on Friday they had not been paid for their previous month’s work.

Anxious chatter, mostly in Portuguese among Brazilian students, wafted across the Grand Canal as a group of teachers met with representatives from Marketing English in Ireland (MEI) on Monday, the main umbrella organisation for English language schools across the State.

Martin Brennan, who has taught at the school for nearly two years, stood by the main entrance to the school, fielding questions from confused and frustrated students.

Like many of the 23 teachers at the school, he has small children at home and bills to pay. “Four weeks from Christmas, we’ve lost our jobs and to rub salt in the wound there’s been no communication from the college,” Mr Brennan told The Irish Times.

“It’s very difficult to take, especially this time of year. There was a meeting here last night but no concrete questions were answered.”

He said the situation was also difficult for students who had been left “completely rudderless” after paying substantial fees for classes. “The situation is people are coming here to make a better life, to learn English so it improves their chances of getting a job and now they’re being told ‘you’re out’, basically.”

Anna Duca, who moved to Ireland from Sao Paulo in 2017, had already encountered difficulties with the administration at the college when trying to confirm her study visa. She said teachers also struggled with the internal administration system. “My visa was denied two times because of mistakes made by administration. They didn’t send the school attendance letter and sent the insurance letter with the wrong details.”

The 27-year-old student paid €1,600 for eight months of English classes but says most students pay well over €2,000. More than 90 per cent of the students are Brazilian with others from Mongolia, Mexico, Colombia and Russia, Ms Duca said.

“I’m really worried for students but also for staff because we had really good teachers here and I know how difficult it is if you don’t have your salary. Everybody’s here now waiting [FOR]the director to say something.”

Like many other students, Ms Duca was confused by a message posted by Grafton College on Instagram on Sunday which relayed its disappointment at the situation but failed to provide an explanation to students.

The message, which was posted to the @graftoncollegedublin account by a person called ‘Anna’, wrote: “I hope we all get the respect we deserve tomorrow and in the long run because the outcome of all our hard work, in this instance, is clearly unfair and unjust.”

A subsequent comment under the post advised students to attend school as normal on Monday. “You will get all the information tomorrow.”

It is understood the lease on the building occupied by Grafton College was coming to an end in the new year, and there were plans for it to relocate. However, there were no indications of any financial difficulties or imminent closure.

Management and representative groups have been unable to make contact with the London-based owner of the school since Friday. There are around two weeks left of the term before the Christmas break and up to 500 students attending the school.

“This sector has been blighted over the last five or 10 years with this sort of situation, with schools closing down overnight, students left without anywhere to go, teachers left out of pocket,” he said.

The international English language teaching market is worth an estimated €762 million to the Irish economy, according to the Department of Education. The Qualifications and Quality Assurance Bill, legislation drawn up to deal with its regulation, is currently before the Oireachtas.