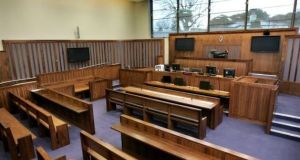 A jury will hear a man accused of murder was heard laughing with his girlfriend after the victim’s body was thrown into a river, a court was told.

Ciprian Grozavu (44), a Romanian national, has gone on trial at the Central Criminal Court sitting in Cork after he pleaded not guilty to the murder of Jonathan Duke (27), at Bridge House, Sean Hales Place, Bandon, Co Cork on November 12th, 2011.

Opening the prosecution case before a jury of eight men and three women and Ms Justice Tara Burns, Tim O’Leary SC told the jury that they will hear evidence that the body of Mr Duke was recovered from the River Bandon.

He said they will hear gardaí began an investigation following the discovery and a postmortem by Assistant State Pathologist, Dr Margaret Bolster found that he was dead or effectively dead when he entered the water. Drowning played no part in his death and he died from strangulation, the court heard.

He said the jury will hear that Mr Grozavu, whose nicknamed was Chippy, was living in a flat in Bridge House which was right on the river and that he was in a relationship with a Catherine O’Connor, a native of Kinsale, who would stay there from time to time.

The jury would see CCTV footage from around Bandon showing Mr Duke in the company of the accused and O’Connor and that there was a lot of drinking going on the day that the Bandon native was killed, said Mr O’Leary.

He said the jury will hear evidence that two men living in Bridge House, Shane O’Driscoll and Aaron Nolan were at home on the night Mr Duke was killed.

They heard a commotion coming from Ms Grozavu’s flat just after 10pm and Mr O’Driscoll went out on to the landing to see what was happening.

He said that they will hear evidence that Mr O’Driscoll and Mr Nolan looked out a window and saw a body being thrown from the front of the house into the River Bandon, where it was later found a short distance downstream.

He saidthe jury will hear evidence that Mr O’Driscoll and Mr Nolan heard thea accused and O’Connor laughing loudly as they went back upstairs.

Mr O’Driscoll and Mr Nolan ran from their flat to a nearby pub where they contacted gardai who were quickly on the scene.

He said the jury will also hear evidence from Garda Kieran Murphy that he found blood marks all the way up the stairwell and he found Mr Grozavu in his flat with O’Connor.

He said that jury would hear that O’Connor has been found guilty of Mr Duke’s murder but the fact that she was convicted of the killing had no bearing on the case against Mr Grozavu. The prosecution would have to prove their case against him beyond all reasonable doubt, he said.

Mr O’Leary said the jury will have to deal with some unsavoury facts given that they will be dealing with a dead body.

Their hardest task will be to decide whether Mr Grozavu was involved in the killing and whether he intended to kill or cause serious harm to Mr Duke. The trial is expected to last two weeks.