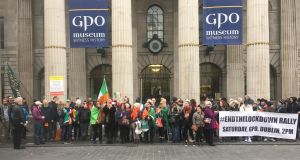 A number of protesters held a demonstration opposing the national coronavirus lockdown restrictions at the GPO, in Dublin city centre, on Saturday.

A group of around 60 demonstrators carrying banners and tricolour flags gathered on O’Connell St at 2pm.

A number of Garda public order units were on standby, but the protest passed without any clashes between the demonstrators and gardaí.

Shortly after the crowd began to gather two gardaí approached the group and cautioned them that the protest was not in line with public health guidance.

The gardaí asked the group to identify who were the organisers of the protest, which the group refused to do.

A small Garda presence stood across from the GPO monitoring the protest, which lasted more than two hours.

Two public order unit vans were stationed on a side street beside the GPO, with another three Garda vans on standby further down O’Connell St.

Protesters’ placards and a large banner called for an end to the lockdown measures, which the Government put in place to limit the spread of Covid-19. Other signs carried common conspiracy theory messages opposing vaccines, 5G, and fluoride.

During a series of speeches the protesters frequently criticised Covid-19 public health measures, the Government, the Garda and the media.

Leaflets distributed by demonstrators carried a number of false claims often spread by the far-right, including the conspiracy theory that the coronavirus pandemic was a staged event.

Few in the crowd wore face coverings, or observed social distancing, with several people hugging and shaking hands as the group gathered. A number of young children were also brought to the protest.

A number of gardaí used batons to overpower protesters before pinning them on the ground and handcuffing them, to ensure the city’s main shopping street was not occupied for a sit down protest, as occurred a number of weeks previously.

Speaking on Friday, Garda Commissioner Drew Harris said there had been no “heavy handedness” in the Garda’s response to anti-lockdown protesters on Thursday. Gardaí would not allow protestors to “stampede” down the city’s main streets, he said.