Paul Reid believes early trends should give everybody ‘encouragement’ 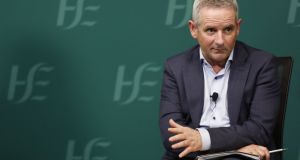 HSE chief executive Paul Reid has said a decline in the positivity rate of those infected by Covid-19 gives hope for the future.

In the last seven days the rate of people who have tested positive for Covid-19 has dropped from 8.9 per cent of those who have been tested to 5.8 per cent, a fall of more than a third.

The positivity rate is regarded as a key indicator of the spread of Covid-19 within the community and it is also an indicator for the prevalence of asymptomatic cases.

Mr Reid tweeted on Friday evening: “Always reluctant to declare a trend. But for the last 7 days we’ve seen the positivity rate from testing reducing marginally each day. From 8.9 per cent to 5.8 per cent. One way or another, I hope it gives everyone some encouragement and hope.”

Danny Boy suggested that the Level 3 restrictions which were brought in on October 6th only to be supplanted by Level 5 restrictions this week had started to work.

He tweeted: “The early impact of October 6th’s Level 3 restrictions is potentially on display because the positivity rate was quickly heading north of 8% and has dropped off this week. It’s 5.8% in the last 24 hours.”

Danny Boy contrasted Ireland’s falling positivity rate with rates in Belgium and the Czech Republic which are 18.7 per cent and 34 per cent respectively, and still rising.

“So whether it’s the Level 3 impact or simply people staying on their couch more a few weeks ago, there’s a demarcation or divergence happening,” he wrote.

“That we have managed to turn on to a different course, for the moment, is very good - but we can still arrive at the same destination as Belgium or the Czech’s, taking the low road.”

Mr Varadkar retweeted the thread and added the comments: “Too early to know for sure but this is encouraging.”

Speaking at the MacGill Summer School on Thursday, Professor Mary Horgan, a consultant at Cork University Hospital, said numbers entering the hospital system have levelled off as a result of the previous Level 3 restrictions.

The situation is very different to how it was in the spring, she stressed, as doctors know better how to treat the virus.

She is now back treating Covid-19 patients on the wards in Cork University Hospital which had to put on extra ICU capacity last week.

Prof Horgan, who is the first female president of the Royal College of Surgeons in Ireland, said the picture is not all “doom and gloom”.

“What has changed? My ability to treat patients is better. The use of steroid has made a huge difference in getting patients better. My hope is that the Level 3 restrictions have had an impact already.”