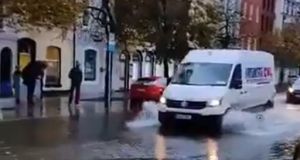 Many businesses and shops in Cork city have been left under a metre of water after significant flooding hit several streets last week. Photograph: Seamus J Kearney/PA Wire.

Redesigning a key part of the €150 million Lower Lee Flood Relief Scheme designed to protect Cork city centre could delay the project by up to five years, a local authority has warned.

A new planning process and public consultation period would be necessary if the €6 million Morrison’s Island Public Realm project, designed to prevent up to 80 per cent of the flooding affecting the city centre, was to be altered, Cork City Council said.

“It could result in planning appeals and further adjudication by An Bord Pleanála and another long sequence of litigation by those who might oppose any new design,” the council and the Office of Public Works (OPW) said in a joint statement on Friday.

However, the scheme has been strongly opposed by the Save Cork City campaign group, which said the scheme is over-reliant on walls, will reduce access to the river and will not protect the city centre against flooding.

Save Cork City has mounted a number of legal challenges to the Morrison’s Island project. The council last year had to submit a fresh planning application as a result of one of these challenges, which was approved last June.

The campaign group has since appealed to the High Court for leave to seek a judicial review of the An Bord Pleanála decision and the High Court is due to rule on November 3rd on whether this challenge can proceed.

The council and OPW say the Morrison’s Island scheme is ready to go if those who oppose it end their challenge to the project, which was approved after a period of public consultation.

“It is a project that An Bord Pleanála has given a positive endorsement to and as recent events have shown, it is absolutely urgent that it is implemented,” they said.

They said the urgency of the situation is compounded by the fact that the city centre cannot be protected by temporary flood defence measures such as inflatable flood barriers at locations such as Morrison’s or Father Matthew Quays.

During a visit to Cork to see the damage caused by Tuesday’s flood, Minister of State for the OPW Patrick O’Donovan called on Save Cork City to withdraw its legal challenge against the scheme.

However, Save Cork City spokesman John Hegarty told Cork’s 96FM that the group would not be withdrawing its challenge as they believed that this was the wrong scheme to protect the city.

“It’s time for them to think about putting in temporary defences that wouldn’t need planning application so that they can take the time to think about how Cork as a whole city can be protected from flooding,” he said.

Mr Hegarty said the OPW must take responsibility for delaying the right kind of flood defences for Cork by insisting on going ahead with a wall based system, and that it should instead consider a tidal barrier.