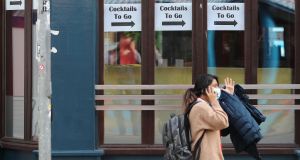 A further 859 cases of Covid-19 and four deaths have been recorded in the State as the Taoiseach warned there were ‘bumpy roads ahead’ in the fight against the disease. Photograph Nick Bradshaw/The Irish Times.

A further 859 cases of Covid-19 and four deaths have been recorded in the State as the Taoiseach warned there were “bumpy roads ahead” in the fight against the disease.

In a statement on Saturday evening, the Department of Health said a total of 56,108 cases have now been recorded in Ireland and 1,882 people with the disease have died.

The median age of those diagnosed with the disease was 35 years, with 441 cases diagnosed among women and 415 among men.

As of 2pm on Saturday there were 315 people ill with Covid-19 in hospitals, with 37 of these in intensive care units. Sixteen people were hospitalised as a result of Covid-19 in the previous 24 hours, the department said.

Meanwhile, Northern Ireland’s Department of Health said it was notified of six further Covid-19 linked deaths and 923 cases in the previous 24-hours.

Earlier, Taoiseach Micheál Martin warned that there are “bumpy roads ahead” for Ireland in the struggle against Covid-19.

With the State this week moving to the highest level of restrictions in an effort to contain the disease, Mr Martin said lessons had been learned from reopening society and the economy after the first lockdown.

This experience would inform the decisions that will need to be made when it comes to easing restrictions at the end of the six week period, he said.

“As a country we are getting through this and there are a lot of bumpy roads ahead in relation to Covid-19,” he told the MacGill Summer School, which is being held online this year because of the pandemic.

Mr Martin accepted the Level 5 restrictions are “very difficult” for people “who are now fatigued, particularly after the first lockdown” but added “that is the cycle we are in”.

He suggested there is evidence that Level 3 restrictions had “some controlling influence on the spread of the virus and I think we have learned from the first reopening that how we manage the next one is going to be important”.

“The issue seems to me that at Level 2 a whole lot of behaviour developed that seeded a lot of the spread of the virus,” he added.

HSE data, obtained by The Irish Times, shows that the average number of contacts that a positive case has reported after testing positive has fallen to an average of three from five last week and six at the start of this month.

Defending the Government’s plan on living with Covid-19 plan, Mr Martin said some politicians across Europe “thought it was very effective” and “sort of praised it” in their parliaments, “particularly the Dutch parliament”.

Pressed on why the coalition only moved the country to Level 5 two weeks after the National Public Health Emergency Team (Nphet) recommended a lockdown, Mr Martin said time was needed “to prepare ground for the move”.

Other issues such as schools, construction and the mental health impact had to be considered, he told interviewer Olivia O’Leary.

Again ruling out calls from some to try to eradicate the virus or to let it transmit uncontrolled through the population to give so-called herd immunity, Mr Martin said the strategy is one of “trying to suppress it through human behaviour and restrictions”.

The Government also had to keep the economy viable and set foundations “for recovery after Covid”, which he said was “no mean achievement in itself”.

Speaking earlier at the summer school, Prof Adrian Hill, who is working with a a team at the University of Oxford that is seeking to develop a vaccine, said he believes “one or two” vaccine candidates being trialed worldwide would be “shown to work before the end of the year”.

But he said the “sobering reality” is that no vaccine has ever been given to even half billion people in a year and that health authorities globally would be trying to do “five times that” to bring the pandemic under control.

Leading vaccines would likely provide immunity for two or three years, but, with some, people might need a “booster” jab every winter, as happens with the flu vaccine, he suggested.

Prof Hill said governments also needed to start looking at developing and stockpiling vaccines against the threat of future pandemics from known viruses which could jump from animals to humans.

He said the World Health Organisation had identified 12 such threats which are “pretty well agreed”.