‘At the end of the day, he didn’t regret it’ Liam Sutcliffe’s son tells mourners 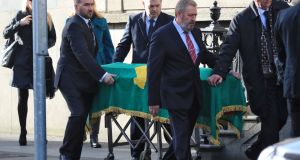 The remains of Liam Sutcliffe, the man who he blew up Nelson’s Pillar on O’Connell Street, Dublin in 1966 are taken into the Church of Our Lady of Mount Carmel, Whitefriar Street this afternoon. Photograph: Colin Keegan, Collins

The funeral of a man who left an indelible mark by destroying something of the city he loved was never going to be just a family affair. It was that, for sure, but it was also something more.

They crowded into the Church of Our Lady of Mount Carmel on Dublin’s Whitefriar Street, some 800 people – a grieving but proud family, friends, regular Wednesday morning Mass-goers and, mingling with them, white-haired old republicans and more than a few burly-looking, hard chaw, 50-something keepers of the flame.

Liam Sutcliffe’s coffin was draped in the Green Harp flag of Fenian Ireland as it stood before the altar. Beside it was a wedding photograph of him and Greta (Bernadette), his wife of over 60 years, the pair of them separated only by her death in February 2016.

The High Kings – Darren Holden on piano and singer Brian Dunphy, accompanied by John O’Brien on guitar, flute and tin whistle – played the entrance hymn, Dublin In The Rare Auld Times. . . Ring a ring a rosie as the light declines, I remember Dublin city in the rare auld times. . .

In some respects, the rare old times for Sutcliffe, who was 84 when he died last Friday, were defined by his embracing violent republicanism. Known to his comrades as an Irish republican and revolutionary, he joined the IRA in the 1950s and at one stage was the organisation’s “agent” inside Gough police barracks in Armagh.

He helped with recruiting and took part in the IRA’s so-called border campaign in the 1950s but later joined Saor Éire, a fringe group of militant republican Marxists with a penchant for robbing banks who broke from the IRA in 1967 because of its lack of military activity.

But in between, there was the single act for which Sutcliffe will be remembered in the history of Dublin. Sutcliffe claimed – and no one seriously doubts the validity of his assertion – to be the man who blew up Nelson’s Pillar on O’Connell Street on March 8th, 1966.

By his own account, it was the second attempt. The first was on March 1st. Sutcliffe described many years later how, having planted the bomb, two colleagues, Pat Murphy and Joe Christle, were discussing the device and realised a 12 hour clock timer had been used when setting it to explode.

This meant the blast would occur at four on a busy weekday afternoon, rather than at 4am, the desired time.

“Pat lost it,” Sutcliffe said in a 2013 filmed interview, “and said ‘Jesus, we’d better ring the Special Branch and tell them there’s a bomb up there’ and Chris [Christle] said ‘No, fuckit, let it go’.

“There would have been devastation,” said Sutcliffe, thankful the bomb had failed to detonate.

Sutcliffe returned to the Pillar and, with a nail clippers bought in Clerys, cut the bomb’s wires, stuffed it into a holdall bought in Liffey Street and took it away for examination. “It was completely and utterly a load of crap because it was wrongly wired,” he recalled in 2013.

Sutcliffe’s remade bomb was more successful and exploded shortly after 1.30am on March 8th, reducing the 40m high pillar and statue to a 21m stump amid a mass of rubble. What had defined the streetscape of central Dublin since 1809, but was never loved entirely by all, was finished off six days later by the Army.

The only reference at the funeral to the destruction of the pillar was in son Mel’s eulogy. Noting that in the 1950s his father decided he no longer wished to be “an armchair republican”, he allowed his entrepreneurial skills take him “towards the demolition industry – the removal of dear old Nelson from his imperial view over Dublin”.

It was an act, his son conceded, that “still sparks a lot of controversy”.

“Right or wrong,” Mel told the packed church, “it is what it is . . . At the end of the day, he didn’t regret it. He did what he believed in, what he felt was right.

“But be under no illusion, he was a committed republican right up until his last breath, an unapologetic republican.

“There is no apology. God bless the Republic. God bless Ireland,” he said to loud applause

In his homily, Father Hugh Kavanagh said the family photograph at the back of the funeral programme was the “real heritage of Liam and Greta”. The couple had seven children, 14 grandchildren and two great grandchildren.

Their home was a place of love, of sharing and of sacrifice, he said, where beliefs, values and convictions were passed to the rising generation. Liam had been a wonderful conversationalist, a man of great ideals and conviction.

“He was a very sincere and genuine person,” said Fr Kavanagh who was now reunited, through God, with his wife.

The High Kings played The Lonesome Boatman, The Town I Loved So Well and An Chúilfhionn (The Coolin) but it was no fewer than seven pipers whose stirring rendition of The Dawning of The Day almost lifted the roof off the enormous church as Liam Sutcliffe’s children carried him out.

At Mount Jerome, he was piped to his grave to A Nation Once Again and, as his family dropped in red roses, three elderly comrades played and sang Boolavogue, the ballad linked indelibly to the United Irishmen rising of 1798.