Ross says ‘calls have been made’ on Rugby World Cup 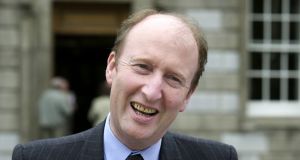 Minister for Transport and Sport Shane Ross said the award of the 2023 Rugby World Cup was a “matter of persuasion”. Photograph: Cyril Byrne.

The Government is still lobbying to have the recommendation that South Africa host the 2023 set aside in favour of the Irish bid, Minister for Transport and Sport Shane Ross has said.

He said the Taoiseach and himself were lobbying hard to have the recommendation set aside, though he clarified that he had not actually spoken to anyone involved in the process himself and was not therefore directly involved.

“Both the Taoiseach and I are going to make further efforts as are other ministers to persuade people to vote in our favour . We’ve got a week to go and we’re very optimistic that we’ll still make it,” Mr Ross told journalists on Wednesday morning.

“Several telephone calls have been made to people who are extremely key in this just to persuade them of what’s going on,” Mr Ross said.

Asked if he had made any of the calls himself, Mr Ross said, “I haven’t made any calls at all as of now. But I’ve been working with the department to get people to make what calls are necessary.”

“It’s a matter of persuasion,” Mr Ross said. “We think the people who have recommended are wrong, and we think that we have all the facilities available and we think they could be persuaded by this. I’m not giving up under any circumstances.”

Yesterday, the Taoiseach’s spokesman said that there was no direct political involvement in the lobbying.

Mr Ross also said that South Africa will have empty stadiums for minor matches at the rugby world cup.

On the rail strike, Mr Ross said that he hopes that both sides will go to the Labour Court and Labour Relations Commission “in the next week or so”.