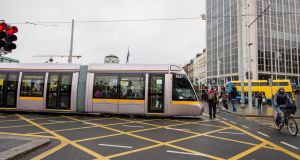 Luas ticket machines at stations across both tram lines were unable to accept card payments on Friday morning, causing great frustration to passengers seeking to top-up their Leap cards and buy tickets.

The Luas Twitter account posted shortly after 7.30am on Friday that its credit card system was down “line-wide”. A statement on the website said clamping had been suspended at all Luas Park and Ride facilities for duration of Friday, February 9th.

Luas technicians are currently working on the system and are reportedly close to finding a resolution to the problem.

Real-time passenger information displays at some stops was also down on Friday morning. The Luas Twitter account advised passengers to check the time of the next tram using their app and apologised for any inconvenience caused.

Friday’s technical malfunction follows delays on Thursday after a new 55-metre Luas tram was forced to stop on the 45-metre O’Connell Bridge on Thursday. The tram stopped with its rear carriage protruding across a yellow box junction between O’Connell Bridge and the south quays.

The incident, which happened during the Thursday morning rush, was cleared quickly, but followed severe congestion in the College Green area since the introduction of cross-city trams in December.

In a bid to reduce congestion in the city centre, Luas operator Transdev has reduced frequencies on the Green Line during the morning peak period, but this has resulted in complaints of very crowded conditions and some people being unable to board.

Dublin City Council management has spoken of the possibility of banning east-west travelling buses from the College Green-Dame Street axis. However, Chairman of Dublin City Council’s strategic transport committee Ciarán Cuffe has said the city should be careful about banning buses which, he says, carry 40 per cent of public transport passengers in the area.

Transport authorities in Dublin will meet next week to consider how to tackle the congestion problem. The city council and the National Transport Authority will hold discussions, but it is understood Transdev has not been invited to attend.