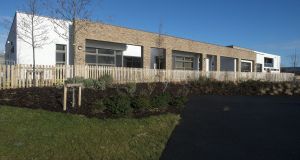 The Christian Brothers propose to sell 7.5 acres of fields, used by Clonkeen College in Deansgrange for sports, for a reported €18 million. Photograph: Dave Meehan

An ongoing dispute between the Christian Brothers and a south Dublin Catholic secondary school over the planned sale of playing fields has been referred to the Attorney General.

Minister for Education Richard Bruton has sought legal advice from the Attorney General following a request from the patron of Clonkeen College in Deansgrange to dissolve the school’s board of management (BOM).

The school’s patron, Edmund Rice Schools Trust (ERST), last month requested the Minister’s permission to dissolve the BOM. This followed the board’s decision to take legal action against the Christian Brothers’ proposal to sell 7.5 acres of fields, used by the school for sports, for a reported €18 million.

The trust, a lay organisation founded in 2008 to manage nearly 100 formerly Christian Brothers schools, has accused Clonkeen College’s BOM of not “complying with its obligations” to protect the best interests of the school in taking its action against the congregation.

A spokeswoman for the Minister told The Irish Times: “The statutory process of dissolution is under way in which the Minister for Education must make a decision having considered the submissions made.

“The Minister has sought clarity from the office of the Attorney General in relation to the correct procedures to be followed as part of this process. It would not be appropriate to comment on the matters that are related to the dissolution.”

The school’s case against the congregation, disputing the congregation’s right to sell the fields, is due to be heard in the High Court next month. The sale cannot complete until the legal case has been resolved. It is unclear whether the case can still be heard, however, if the BOM is dissolved.

If the board is dissolved, according to the Education Act, ERST may “subject to the approval of the Minister, appoint any person or body of persons as the patron thinks fit to perform the functions of the board”.

The spokeswoman did not indicate when the Attorney General’s advice would be presented to the Minister, or when he would announce his decision.

At a public meeting at the school on Monday, called by the school’s parents’ association, local TDs pledged their support to the school, its BOM, staff, parents and students.

Larry O’Gara, member of the BOM, said on Thursday there was a “clear appetite” among the hundreds at the meeting for “taking protest to the streets”.

A meeting on Friday, called by the students and the parents’ association, would decide “next steps” he said.

Minister of State for Higher Education Mary Mitchell O’Connor said on Monday she would work “tirelessly” to ensure the school community got a fair hearing at Government level and to protect the interests of current and future pupils.

People Before Profit TD Richard Boyd Barrett said the work of the school’s board had been “exemplary in its defence of facilities” and that its actions were “purely motivated by the best interests of the students and the school community”.

The trust has reiterated its view that the legal action by the BOM is not in the school’s interests.