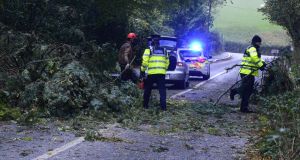 October 2017
Storm Ophelia made landfall over Ireland as an “extra-tropical storm” on the morning of October 16th, 2017, and brought wind speeds of 191km/h to parts of Ireland.

The storm left more than 385,000 homes without power, caused coastal flooding while all schools and many businesses closed for the day.

It is estimated Storm Ophelia caused almost €70 million worth of damage including emergency repair funds, ESB expenditure and cost of insurance payouts.

The Beast from the East hit the country during the last week of February with more snow than had been seen since the 1980s. Taoiseach Leo Varadkar pleaded for people to stay indoors as the weather system met Storm Emma and its 100km/h gales.

All flights in and out of Dublin and Cork airports were cancelled, as were most forms of public transport. Schools were closed and supermarkets cleared as people stockpiled ahead of the red weather warning. The HSE cancelled all outpatient appointments and non-urgent surgeries for two days.

A Lidl on Fortunestown Lane, Tallaght, was looted with a mechanical digger, which was used to take the roof off the building and lift out the safe.

Storm Darwin hit Ireland on February 12th, 2014, with Shannon Airport recording a maximum gust of 160km/h. More than 215,000 homes lost power and there was also extensive coastal flooding and damage to buildings.

Up to 7.5 million trees were blown down – between 5,000 and 7,000 hectares of forestry – which was about one per cent of the national total. Storm Darwin was one in a series of nine storms between 2013 and 2014 which caused at least five fatalities and hundreds of millions of euro in damage.

Storm Desmond marked the onset of one of the wettest Irish winters on record. Desmond was the fourth of 10 such storms over November and December 2015, which led to severe flooding in the midlands and west along the banks of the Shannon and tributaries.

By December 29th, and with the arrival of Storm Frank, the southeast was also seriously affected. Met Éireann measured 602mm average rainfall in Ireland during the period.

The cost of damage to infrastructure was estimated at about €106 million, and the Government has committed €430 million towards increased flood relief measures from 2016 to 2022.

Storm Desmond may also be remembered for RTÉ journalist Teresa Mannion warning people not to make any “unnecessary journeys” during a live broadcast from Galway’s Salthill promenade.

Storm Ali hit the country on September 19th, 2018, bringing force 11 winds, with gusts on the west board reaching 142km/h, the highest level recorded since the Mace Head station in Co Galway opened in 2004.

Elvira Ferraii from Switzerland died after the caravan she was staying in was blown onto a beach in Co Galway and electrician Matthew Campbell from Belfast died in the Slieve Gullion Forest Park after he was hit by a falling tree while working for the Northern Ireland Water Utility.

The storm forced organisers of the Ploughing Championships in Tullamore, Co Offaly to cancel the second day of the three-day event and put on an extra day on the Friday.