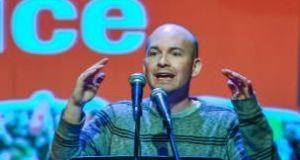 Paul Murphy: he says Rise will act as a third arm of Solidarity-People Before Profit. Photograph: Getty Images

If ever there was a need for a new academic discipline it would be micropolitics. Its primary subject matter? Left-wing groupings in Ireland.

There are many socialist organisations, but the difference between them is not obvious to the untrained eye. It is only through years of hard labour and re-education in the field that a person will acquire the ability to recognise the nuances, arcane history, and not-quite-identical tactics that distinguish them.

The launch of Rise (Radical, Internationalist, Socialist and Environmentalist), a new left-wing group founded by former Socialist TD Paul Murphy, has brought to 15 the number of groups and parties on Ireland’s political left, including Sinn Féin, the Labour Party, the Social Democrats and the Green Party.

The old joke goes that the first item on the agenda for any left-wing party is the split, and there is ample evidence to bear that out in this State. Independents 4 Change, for example, had its origins in the departure of Clare Daly from the Socialist Party.

Murphy said Rise would act as a third arm of Solidarity-People Before Profit, which is made up of two distinct political parties, both Marxist and Trotskyist, and both close in many respects but destined never to join together.

The Socialist Party was formerly a party of the militant tendency within the Labour Party in Ireland, and is affiliated to the hard-left Committee of Workers’ International, which is based in Britain.

For an outsider the easiest way to distinguish between the two parties is in their different views on Northern Ireland and Sinn Féin.

People Before Profit would be seen as more tolerant of republicanism, while Solidarity regards Sinn Féin as a sectarian party. Also, they have different positions on broader coalitions of the left, with the Socialist Party/Solidarity always strictly circumscribing its involvement.

These were among the grounds that led to Murphy and a small group of supporters leave the party to form Rise. Murphy has been influenced by the rise of Syriza and Podemos and ground-up campaigns like that against water charges and Repeal the Eighth.

Murphy sees potential for groups like his to join and influence wider parties such as Labour in Britain and Democratic Socialists of America. He is also open to co-operation with Sinn Féin and the Greens.

Indeed, Rise seems not too far removed from People Before Profit, which itself has called for a broad left movement. What separates them is not easily explainable to those outside the fold.