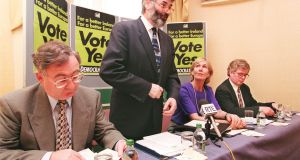 A growing number of political groups have positioned themselves further left of the Labour Party and Sinn Féin, including:

The political title for the Socialist Workers Network, formerly Alliance - a marxist and Trotskyist party founded in 1971. It has three TDs but lost a number of council seats in the local elections.

Originally the militant tendency of the Irish Labour party, it was formed after this group, which included Joe Higgins and Clare Daly, were expelled.

It is also Trotskyist in nature but is less pragmatic and more hardline in adhering to its core tenets, and less open to cooperation with other groups. It has two TDs, Ruth Coppinger and Mick Barry.

The new group founded by Paul Murphy will still be a involved with Solidarity-People Before Profit but will have a distinct identity. It is not registering as a political party and is focusing more on getting involved with broad left-wing and grass-roots campaigns.

It began as official Sinn Féin but by the 1980s had turned its back on republicanism. It was influential in the 1980s as a political force and within trade unionism but most of its leading TDs and MEPs - including Proinsias de Rossa, Pat Rabbitte, Liz McManus, Kathleen Lynch and Eamon Gilmore - left to form the more moderate Democratic Left. That eventually was subsumed into the Labour Party. A small party was left behind which has struggled since and has currently only one councillor.

A left-wing alliance of independent representatives, spearheaded by Clare Daly and Mick Wallace. Both have now moved to the European parliament and the group’s candidates struggled, like other small left wing parties, in the local elections.

A radical republican party which has not yet contested a seat in the Dáil. It has failed to have any councillor elected under its banner in the State.

Has been in existence since 1933 but has never had an electoral impact, though it continues to survive and produce analysis on Irish society and politics.

Clonmel-based registered political party has been relatively successful over the years. Despite being highly local, it has managed to consistently elect councillors to Tipperary County Council. The effective head of the party, Séamus Healy, is a TD for Tipperary.