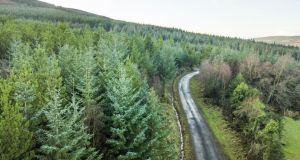 Competing land use, including an expansion in dairy farming, has been cited as a reason for a deficit in activity. Photograph: iStock

Efforts to increase tree planting in Ireland, a key component of climate change mitigation, have fallen short of targets by thousands of hectares of land.

An analysis of afforestation by the Comptroller & Auditor General (C&AG) found a shortfall of 44 per cent in 2018 targets alone and a budget under-spend of €11 million.

Competing land use, including an expansion in dairy farming, has been cited as a reason for a deficit in activity.

“Forests are increasingly recognised as a means to sequester carbon and help reduce the State’s greenhouse gas emissions,” the report noted, as well as counting other environmental and employment benefits.

It also cited the Department of Climate Action’s National Mitigation Plan 2017 which pointed to considerable scope for climate change mitigation by increasing the amount of forested land and through the use of forest-based biomass and wood products.

Ireland has one of the lowest levels of forestation in the EU – in 2017 about 11 per cent of the country was covered in trees compared to a European average of 38 per cent in 2015.

A State funded forestry programme exists to boost activity in the sector but the C&AG report found a “consistent under spend” between 2014 and 2020 in untapped financial assistance.

“The under spend was mainly due to the lower than anticipated take up of grants by land holders,” the report noted.

Amongst the reasons for this, the C&AG said, was competition for land use, including dairy expansion, a sector by contrast heavily linked with Ireland’s poor performance in carbon reduction.

It is also thought there may be difficulties in convincing remaining farmers who have not given over land to forestation to do so.

In 2018, the Department of Agriculture received 1,074 applications for grants relating to 8,623 hectares of land. In total, 855 applications in respect of 6,964 hectares were approved.

The report also identified a shortfall in the use of grants to build access roads to forests, an essential logistical aspect of expanding coverage.

It said issues around securing planning permission for those that linked with main roads were largely responsible, a complication currently being remedied.

The Department set a target of funding 110 kilometres of forest road per year - between 2015 and 2018 just two thirds of that target had been reached.

By the end of 2018 the Department was also owed €952,000 in grant refunds from various recipients who failed to deliver on scheme conditions.