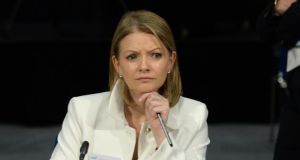 Olivia Buckley is expected to to run for Fianna Fáil in the Dublin Rathdown constituency Photograph: Dara Mac Dónaill/ The Irish Times

Fianna Fáil is lining up a former spokeswoman for Bertie Ahern to stand for the party in Dublin Rathdown.

Olivia Buckley is expected to fill a void left by the decision of Justin McAleese not to run for a seat in the south Dublin Dáil constituency.

Mr McAleese, a son of former president Mary McAleese, had been expected to stand in the three seat constituency, which counts ministers Shane Ross and Josepha Madigan, as well as Catherine Martin of the Green Party, as its sitting TDs.

He had been appointed as local area representative but he has recently told the party he will be unable to stand in the general election due to work commitments.

Ms Buckley was Fianna Fáil’s press director under Mr Ahern’s leadership, and is currently director of communications for the Irish Tax Institute. She is initially expected to contest a Dún Laoghaire-Rathdown council seat in the Dundrum ward at next spring’s local elections, with a view to standing for the Dáil at the next general election.