No legislation in place to specifically deal with ‘crow bangers’

Authorities regularly receive complaints over the use of the devices 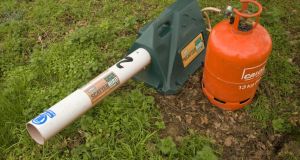 There is no legislation specifically to deal with bird scarers, also referred to as crow bangers, which are usually employed by farmers to dissuade birds from eating recently planted crops or seeds.

The Department of Environment and local authorities regularly receive complaints over the use of the devices, especially by people living in rural areas .

In May 2017, then minister for the environment Denis Naughten told Independent TD for Kerry Michael Healy-Rae, in a written reply, that any issues with crow bangers came under general noise regulation rules governed by the EPA. There were no plans for specific legislation, he said.

He referred to his department’s Guide to Noise Regulations, a four-page leaflet outlining what is open to persons complaining about noise, including the powers of a local authority.

“Current legislation in the area of noise does not specifically address the use of bird scarers (also referred to as crow bangers), and I have no plans to introduce such legislation,” Mr Naughten said.

Kerry County Council said on Monday it had recorded 13 noise complaints in relation to crow bangers in the period 2013-2017. This was out of a total of 112 noise complaints ranging from loud music, burglar alarms, and construction-related noise. This year, there have been two complaints about crow banger use.

“It is worth noting that apart from the option of making a complaint to a local authority, the public have direct recourse to the District Court under the EPA Act to abate noise nuisance,” a council spokesman said.

Anthony O’Mahony’s use of a crow banger on his tillage farm in Rattoo, Co Kerry was central to a murder trial in the Central Criminal Court in Tralee.

The court heard Mr O’Mahony was on his way to take the device from a shed and turn it on when he was killed by Michael Ferris on the morning of April 4th, 2017. It was to be used to ward crows and pigeons off newly-sown fields.

The device was brought into the court at the request of the defence and its workings were explained to the jury by expert witness, Garda Jim O’Brien, who said he found it to be louder than a shotgun at close range.

The device was about 20 years old and gas-operated. It operated like a cigarette lighter and gas and noise were “directed out through the barrel or nozzle”. The “ferocity” or fixed noise level were not adjustable, but the frequency was, he said.

Evidence had been given how Kerry County Council was contacted by Rattoo dairy farmer Pat Walsh the day before Mr O’Mahony was killed. Mr Walsh told the trial he had to wear ear protection to cope with the noise.

Mr Walsh described it as “horrendous”, with the banger going off every 266 seconds. “It would follow you everywhere,” he said of the echoing sound.

He said he rang the council’s environment section, which told him they would send him a logbook to keep account of the noise.

The advice on crow bangers in the Department of Environment guidelines on noise is to approach whoever is causing the noise. However, the trial heard from several witnesses there was no point in approaching Mr O’Mahony.

Mr Ferris said the noise would “wake the dead” and had been going on for 30 years while Michael Schumacher, who owns a home near the ancient round tower of Rattoo, told how he and his wife considered moving to a hotel to get away from the noise, which caused ringing in her ears.