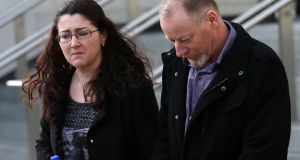 Niece of the late Anthony O’Mahony, Ann O’Carroll: her uncle died when Martin Ferris drove a teleporter into him after a decades-long row. Photograph: Collins Courts

Provocation as a legal defence to murder comes from the days when men tended to be armed and were honour-bound to avenge any personal insult “by instant angry retaliation”, according to a 2001 UK ruling.

Killing another man in a flash of anger “was not merely permissible but the badge of a man of honour”, it said.

There was nothing honourable in the killing of Kerry farmer Anthony O’Mahony last year, who died when Michael Ferris drove a teleporter into him after a decades-long row.

Ferris, a bachelor farmer, was jailed for five years for manslaughter – an unusually light term for what the accused admitted was not an accident.

The reason he was not convicted of murder, with its mandatory life sentence, was because the jury accepted his defence of provocation.

The defence argued O’Mahony was such a terrible neighbour for so long that Ferris was unable to stop himself from repeatedly driving the forks of his teleporter into the victim’s car.

Provocation is a controversial defence, which several legal authorities argue should be replaced or at least codified in legislation. There is no definition in the Statute Book; it’s a common law concept which has emerged through hundreds of years of judicial rulings.

In murder trials, provocation is used by the defence to convince the jury to return a verdict of manslaughter based on the argument the accused suffered an immediate and complete loss of self-control due to the deceased’s actions.

While it may sound simple, judges are dismayed when provocation is raised as it is usually a very difficult concept to explain to juries.

It’s particularly tricky in Ireland where provocation is a subjective test; the jury must decide what was in the mind of the accused. It is simpler in the UK; the jury must simply decide if it was objectively possible that the accused was provoked.

Ireland’s most experienced murder trial judge, the late Mr Justice Paul Carney, called provocation a “graveyard” for judges as it frequently results in verdicts being overturned on appeal because the jury wasn’t properly instructed.

One of the critics of the concept is Brendan Grehan SC, who coincidentally represented Ferris in his trial and successfully used it to secure a manslaughter verdict.