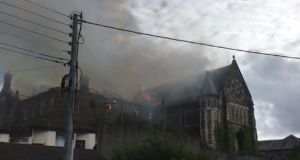 The blaze broke out at the former Sisters of Mercy convent on Cork Road in Skibbereen around 4pm on Tuesday and units of Cork Co Fire Service from Skibbereen, Schull and Bantry were sent to tackle the blaze. Photograph: Barry Roche

Garda technical experts will on Wednesday carry out a forensic examination to try and establish the cause of a fire which badly gutted a former convent in Skibbereen, west Cork.

The blaze at the former Convent of Mercy site overlooking North Street and Cork Road broke out about 4pm yesterday and three units of Cork County Fire Service from Skibbereen, Schull and Bantry quickly responded.

Some 25 firefighters from the three west Cork units were joined by firefighters from Midleton in east Cork, equipped with a hydraulic aerial platform which they used to bring the blaze under control and dampen down the building.

However, the roof of the 140-year-old former convent, which has been derelict for over 15 years, was destroyed in the fire which sent a large plume of grey smoke spiralling over Skibbereen town Tuesday afternoon.

Late last night, firefighters were continuing to damp down the building, assisted by some heavy rain, after they spent over six hours battling to bring the fire under control at the former convent.

By 10.30pm, Cork County Fire Service was reporting that the fire had been substantially extinguished but fire crews remained at the scene, damping down hotspots while working to make the building safe.

Some eight elderly residents of nearby flatlets had earlier been evacuated from their homes and two were taken to hospital as a precautionary measure while the remainder were put up in the West Cork Hotel for the night.

Local Fine Gael Cllr Karen Coakley, a past pupil of Mercy Heights School primary school located on the grounds of the convent, said people in Skibbereen were devastated to see the former convent destroyed.

“The feeling in Skibbereen tonight is absolute devastation to see our beautiful Convent burnt. The fire brigade are still there battling on but sadly this beautiful landmark is gutted,” said Cllr Coakley in a tweet late last night.

“It was an iconic building. Tonight we think of the beautiful craftsmanship, time and labour that went in to this beautiful building which can never be replaced,” said Cllr Coakley who paid tribute to all in the emergency services.

The Sisters of Mercy, who arrived in Skibbereen in 1860 to set up a community at the eight acre site, severed their connections with the town in 2004 and the former convent grew increasingly neglected and derelict in recent years.