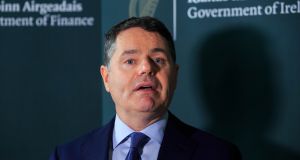 The Covid-19 pandemic will not hit the economy as hard this year as previously feared, as the multinational sector continues to flourish, but a jobs crisis in the domestic economy is looming with high unemployment expected to remain next year as a result of business closures.

Updated forecasts by the Department of Finance, prepared in advance of the budget and published on Tuesday, suggest the effects of the pandemic will continue to damage the economy in 2021, leading to slower growth and higher borrowing.

Minister for Finance Paschal Donohoe said economic conditions this year were “exceptionally difficult”, though the economic damage has not been as serious as feared in the spring.

There has been a “significant upward revision” from previous forecasts, he said, “but this is largely due to the strong performance of parts of our exporting sectors, most notably in the pharmaceutical sector, where exports have surged this year”.

While enhanced activity in these sectors was welcome, he said, it had limited effects on the rest of the economy and the profits were recycled abroad.

“The dual nature of the Irish economy,” he said, “has become even more apparent during this pandemic.”

Inside Politics · Interview: Anne Applebaum, author of "Twilight of Democracy"

Mr Donohoe said modified domestic demand, often used as a proxy indicator for the domestic economy, would contract by 6.5 per cent this year.

While the contraction in the Irish economy overall has been much smaller than feared – at 2.5 per cent, rather than the 10.5 per cent previously forecast – the pandemic has led to a collapse in domestic demand, huge unemployment and massive costs for the State.

These conditions are likely to continue next year, meaning that recovery will be slower and borrowing even higher than anticipated. The Government has already committed to record borrowing this year to meet the costs of the pandemic and will unveil its budget for 2021 in less than a fortnight. The budget deficit this year – the difference between the money collected in taxes and spent running the country – could reach as high as €30 billion. However, the costs of borrowing remain low.

The Department of Finance forecasts have been prepared with the assumption that there will be no Brexit trade deal between the EU and the UK, and that no Covid-19 vaccine will become available. They also assume that there is no return to the national lockdown in place earlier this year.

While some return to more normal economic activity is expected next year, unemployment is expected to remain at over 10 per cent. Some 300,000 people had lost their jobs as a result of the pandemic, Mr Donohoe said.

Meanwhile, the Economic and Social Research Institute (ESRI), the State’s economic think tank, has said that the State should increase spending on social and affordable housing now to avoid a post-Covid housing crunch.

A new paper from ESRI researchers predicts that as State pandemic income supports are unwound, demand will decrease in the housing market. But in the long term, a supply crunch could exacerbate the “imbalance” between supply and demand that already existed, once the economic uncertainty of the pandemic ends and housebuyers come back in to the market.

The ESRI makes its recommendation as new figures show the cost of renting a home is increasing at the slowest rate in almost a decade.

The Residential Tenancies Board’s latest rent index covering the months between April and June suggests rents fell by 0.6 per cent across the State between the first and second quarter. And the year-on-year growth rate nationwide was at its lowest level since 2012.