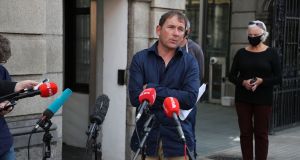 Gino Kenny, the Solidarity-People Before Profit TD who has proposed a Bill to legalise assisted suicide, has said the Government is trying to “kick to touch” on the issue after Ministers decided to seek Dáil approval to delay the Bill for a year.

The Bill comes to the floor of the Dáil on Thursday, and will see its first vote next week. The Government on Tuesday decided to propose an amendment which would see the legislative process paused for a year to enable a special Oireachtas committee to examine the issue.

But on Tuesday night Mr Kenny said the Government wanted to “delay the process”. “We want the Bill to progress . . . and there should be a free vote on that,” he said.

He said a new committee would “unduly delay the Bill and the issue itself”, and said there was no guarantee that the Bill would proceed after the committee had finished its work.

Mr Kenny met Minister for Health Stephen Donnelly and Minister for Justice Helen McEntee on Tuesday for “frank discussions”, he said, and added he would co-operate with the process if the Dáil votes to set up a new committee. He accepts the Dáil’s bona fides on the issue, he said.

After lengthy discussions between the parties, Ministers decided at Tuesday’s Cabinet meeting to table an amendment which would establish a special committee on the issue of assisted suicide/dying with dignity, with the intention that the Bill would return to the Dáil in a year’s time.

A Government spokesman said the issue “merits consideration in great detail” and that “adequate time needs to be given” for this to take place.

The scope of any Bill, expert opinion, potential constitutional issues and the experience of other jurisdictions would need to be examined, he said.

“The Bill gives rise to the most serious questions which must be answered,” the spokesman said.

The Bill proposes that people suffering from a terminal illness – verified by two doctors – should be able to avail of assistance to end their lives, an act that currently carries a 14-year prison sentence. Their wish to die would also have to be verified by two medical practitioners.

The Government parties have indicated that their TDs are likely to have a free vote on the Bill and the amendment next week, with the exception of Cabinet members who will be obliged to support the Government amendment. The issue is likely to be discussed at the Fine Gael parliamentary party meeting on Wednesday.

Rural Independent TDs said they would oppose the Bill, while Aontú TD Peadar Tóibín told RTÉ that TDs needed to understand what was being proposed in the new law.

He said it was a “radical change in Irish law, which seeks to legalise one adult ending the life of another adult”. He said that under the law as it stands, this would be manslaughter.