Search for fisherman missing off Hook Head to resume 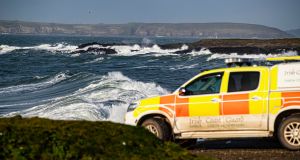 A search and recovery operation to find a fisherman whose trawler sank off the coast of Hook Head, Co Wexford at the weekend is set to resume for a fifth day on Wednesday.

William Whelan (41) from Fethard-on-Sea, Co Wexford has been missing since the Alize went down at about 10.30pm on Saturday night.

The search for Mr Whelan, in an operation coordinated by the Irish Coast Guard, will resume at early light subject to weather conditions.

Naval divers joined the search for Mr Whelan on Tuesday at the request of gardaí.

However, inclement weather delayed the resumption of the search with winds being too high later in the afternoon to allow the R117 helicopter to assist in the operation.

The RNLI lifeboat from Dunmore East was joined by a volunteer crew for Kilmore Quay during the search. Weather conditions at sea were difficult with search crews hampered by strong swells and gale force winds.

A second fisherman who died, Joe Sinnott (65) from Kilmore, Co Wexford, will be laid to rest on Wednesday following noon Mass at St Mary’s Church, Kilmore.

The father of four was winched from the sea but died a short time later in University Hospital Waterford.