Head of Goodbody Stockbrokers lined up for FAI chairperson role 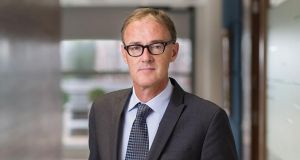 Goodbody Stockbroker boss Roy Barrett, who is known to be publicity-shy despite his status in the world of finance, would have to deal with the public profile associated with the FAI position.

One of the best-known stockbrokers in the country has been lined up for a key role with the Football Association of Ireland (FAI).

Roy Barrett, who is currently managing director of Goodbody Stockbrokers, has been approached about taking up the role of independent chairperson of the embattled association.

Mr Barrett is thought to be considering the position, but has not come to a final decision. He was approached last year by consultants appointed to recruit four independent directors. The nominations committee of the FAI is set to meet this week.

All positions, including the role Mr Barrett has been sought for, are expected to be filled before the weekend.

The position is not an executive role, and it is thought that it would not interfere with his role at Goodbody. However, Mr Barrett, who is known to be publicity-shy despite his status in the world of finance, would have to deal with the public profile associated with the FAI position.

Mr Barrett’s candidature is thought to enjoy strong political support, given his financial acumen and the scale of the funding challenge facing the association, which has liabilities of €62 million. He is known to be a football fan, although he has no ties to the FAI hierarchy historically which is seen as a key criteria for incoming candidates.

He has previously supported former Ireland striker Niall Quinn’s ideas for reforming the organisation, and was named in a document produced by the reform group chaired by Mr Quinn earlier this year.

The names of the proposed candidates for independent chairperson and independent directors have been a closely guarded secret throughout the recruitment process.

The nominations committee had requested that consultancy firm Amrop not inform the FAI board or any other stakeholder of the identity of any candidate, partially due to the express wishes of the individuals identified to come on board in the organisation.

The appointment of the independent directors and independent chairperson is seen as particularly significant for the future of the FAI. It has been made a key plank of reform by Mr Ross, and would pave the way for potential talks on enhanced support for the FAI by the Government. Mr Ross is set to meet with Uefa, European football’s governing body, next Tuesday, to discuss the FAI’s future.

The role of independent chairperson is a new one in the organisation, which was created following a corporate governance review published in June. In a letter to the Oireachtas Sport Committee sent last month, the FAI said Amrop had identified a preferred candidate for the role of independent chairperson, and that at that time “this individual is currently undertaking a thorough analysis of current issues and concerns within the FAI”.

The FAI is hopeful that a way forward can be found through engagement with the Government, Uefa, Sport Ireland and its bank, Bank of Ireland. It requested financial support amounting to €18 million from the Government before Christmas, but that request was denied in the absence of reforms sought by Mr Ross.

The appointment of the independent directors is seen as a first step towards some form of increased support for the FAI.

Mr Barrett has been managing director of Goodbody since 1996, just a year after he joined the firm from NCB Stockbrokers. He had previously worked with investment firms in London.

He played a key role in the agreed sale of the firm to Bank of China which is awaiting regulatory approval.