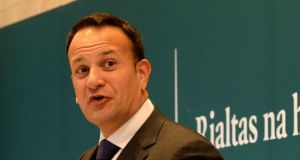 Eighteen rural communities are to benefit from the first tranche of the €1 billion Rural Regeneration and Development Fund which Taoiseach Leo Varadkar said on Friday would allow all parts for the State to share in Ireland’s economic prosperity.

The fund is designed to regenerate towns, villages and rural communities throughout the country, and a further round of allocations will be made early in 2019.

The projects which will share in the initial €35 million funding phase announced on Friday include a Yeats Trail (€500,000) and National Centre of Excellence for Surfing (€615,752) in Co Sligo, the Kinsale Library Project (€2.15 million), the restoration of the Borris Railway Viaduct (€654,820) and the conversion into a museum of the Valentia Island Trans-Atlantic Cable Station (€1.27 million).

The details were revealed in Sligo by the Taoiseach and Minister for Rural and Community Development Michael Ring.

Mr Ring said that the 10-year, €1 billion fund would transform hundreds of rural towns and villages over the next decade. Almost 290 applications were received for the first phase and the Minister said he would be announcing the next successful round of projects early in 2019. A fresh call for applicants will be made in late 2019, he said.

Mr Varadkar said the rural fund was all about making rural Ireland a much more attractive place to stay in, to move families into or to start a business. He said the first round of successful applicants were those which were shovel-ready or almost shovel-ready by the end-of-September deadline.

Stressing that this was the first round, Mr Varadkar said “there are many more to come”. He said he was struck by the dynamism of all the applicants which included projects involving heritage, greenways, tourism, telecommunications and public transport. “Some however stood out from the pack and they are the ones being awarded today,” the Taoiseach said.

The more than 290 applicants included heritage and tourism projects, infrastructural improvement proposals, and programmes for economic development and rural regeneration.

The other recipients in the first round of funding were:

* €1.2 million for the upgrade of the Emo Court Estate, a Gandon-designed house which was he seat of the Earl of Portarlington;

* €1.72 million for Swan Park in Buncrana, Co Donegal, which was devastated by flooding last year;

* €2.7 million for improvements to the Great Southern Greenway Limerick;

* €867,174 to open up an underdeveloped industrial estate in Cootehill, Co Cavan;

* €3.8 million for a new community building in Murroe, Co Limerick;

* €2.1 million for the construction of an Air Dome indoor sports facility in Claremorris, Co Galway.

The initial 18 projects have been allocated €24.4 million of the €55 million available for projects in 2019 but Mr Ring pointed out that with additional funding from other agencies, the total being awarded in the first phase is €35 million.

“I believe we are at a critical point at which to address it,” she added.

Mr Varadkar also visited Strandhill to announce the allocation of just over €1 million from Fáilte Ireland’s large capital grants scheme to Sligo County Council for the Development of a National Surf Centre at the popular surfing resort.

This allocation is in addition to the €615,000 awarded to the project under the rural regeneration fund.

The facility is to be located on a central site along the beach promenade at Strandhill and the news was welcomed by local surf schools and the surfing community.

Fáilte Ireland chief executive Paul Kelly said the development of Ireland’s first state-of-the-art National Surf Centre along the Wild Atlantic Way was a new departure for tourism development which would “ capitalise on the growing reputation Ireland has as a surfing destination”.