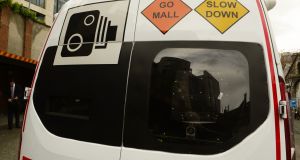 Gardaí have issued more than 500 fixed penalty notices in recent months to motorists exceeding the reduced speed limit on the M7.

The speed limit has been reduced 60 km/h due to ongoing roadworks between Junction 8 and Junction 11.

Since the works started 32 motorists have been prosecuted for dangerous driving.

Gardaí said two GoSafe speed vans will deployed along the stretch from Monday, November 26th to deter motorists from breaking the speed limit, and to keep workers carrying out roadworks safe.

Gardaí said traffic incidents along the route continue to be a cause of significant delays to road users on the route.

Supt Declan McCarthy of Naas Garda District said: “To date, although no loss of life has occurred, there has been a number of very serious incidents. In the past week alone a truck crashed through a barrier in an effort to avoid slowing traffic up ahead. Separately, a van collided with a barrier and landed in the works area.”

“The purpose of this renewed appeal is to urge motorists to slow down, avoid loss of life and serious injury and prosecution for driving offences,” he said.