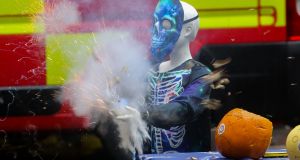 The number of medical emergencies as a result of fireworks around the Halloween period has continued to rise in recent years, Dublin Fire Brigade has said.

More than 900 calls were received by the fire brigade on Halloween night last year, with a fleet of 21 fire engines and 137 firefighters deployed.

Dublin Fire Brigade launched its Halloween Safety Campaign on Friday, which seeks to inform children and their parents of the dangers of illegal bonfires and fireworks.

Dennis Keeley, Dublin Fire Brigade’s chief fire officer, said reports of stockpiling for bonfires “seem to be down on other years”.

“We’re still a few days out from Halloween itself so we’re not dropping our guard on that. We’re remaining vigilant,” he said.

“Last year we did see a decrease in the number of bonfires – we were down to 65 bonfire-related incidents that we attended. That’s significantly down on the year before and the year before that.

“What we are seeing is an increase in medical emergencies and ambulance cases, most related to fireworks.

“We have continued to see some serious injuries as a result of the inappropriate use of fireworks. I think there’s an element of young children being unaware of the dangers and we are working hard on the campaigns and getting the message out.”

Mr Keeley said Halloween remains the busiest night of the year for firefighters, but that Dublin Fire Brigade has “good intelligence and historical data in terms of locations of bonfires”.

“We try and engage with those communities as much as possible. One of the key messages that we like to get out to schools and communities is to respect emergency and council workers at this time . . . Unfortunately, there has been incidents of anti-social behaviour resulting in missiles being thrown, or aggression towards our crews,” he added.

“This obviously is unacceptable. It’s thankfully very much in the minority but again it’s a message we would like parents and guardians to explain the work of emergency services and council workers.”

Tom Brabazon, deputy Lord Mayor of Dublin, said there were a range of “alternative events” young people and families could attend.

“There are alternatives to the illegal bonfires. A lot of areas in the city council are putting on firework displays with legal fireworks. They’re licensed operators who know what they’re doing and the events are managed so that the people are a safe distance away from them,” he said.

Lord Mayor of Dublin Paul McAuliffe has also appealed to the public “to be responsible and not throw out old furniture for use in bonfires”.

“The damage to green spaces and parks each year, because of bonfires is long-lasting,” he said.

A programme of events has been organised by Dublin City Council for the Halloween period, including the Dockers & Demons Festival in the Ringsend/Docklands area, the Cauldron of Smithfield, the Phantom of the Flats in Dorset Street and the Ballymun Otherworld Festival.