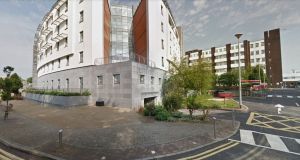 James Duncan was taken off the ventilator earlier this month but he died in the Intensive Care Unit at CUH at about 11am. Photograph: Google Street View

The man who has been named locally as James Duncan from Knocknaheeny on the city’s northside had suffered serious injuries when he was assaulted while attending a soup kitchen in Patrick Street on Septembe 12th.

The assault occurred when a number of volunteers working with the homeless in Cork were providing hot meals for people living rough on the streets. Mr Duncan was working in an old person’s home up to a few months before his death.

Mr Duncan was taken off the ventilator earlier this month but he died in the Intensive Care Unit at CUH at about 11am.

Gardaí have requested the services of the State Pathologist’s Office. It is expected a postmortem will be carried out on Mr Duncan’s remains over the weekend.

Earlier this month on October 11th, gardaí arrested a 46-year-old Englishman for questioning about the assault on Mr Duncan. He was brought to Gurranebraher Garda station where he was detained overnight.

The man was questioned for several hours by detectives before being released without charge on October 12th. Gardai said that they would prepare a file on the matter for the DPP.

Det Supt Mick Comyns renewed his appeal for witnesses in relation to the assault which happened on Patrick Street, Cork close to the junction with Academy Street, shortly after 9pm on Thursday, September 12th 2019.

“We are appealing for anyone who was in the Patrick Street area from 8.30pm to 9:30pm to contact us. We are particularly anxious to speak to the occupants of several cars which were on Patrick Street at the time of the assault.

Also, anyone who may have any mobile phone footage or dash cam footage, please contact us at Anglesea Street Garda station on 021-4522000 or any Garda station,” he said.

Anne Maria Phelan, an aunt of the deceased gave an interview to the Neil Prendeville show on Cork’s Red FM in the aftermath of the assault.

She said that media reports about the incident involved inaccuracies. He lived with his mother for years and was in close contact with his family.

“He wasn’t homeless or living in St Vincent’s Hostel,” she said.

“He was the loveliest person and his Mam is devastated. We have had constant vigils at his bedside,” she said.

“James was one of the quietest boys you could ever meet in your life. He never got in to a fight in his life. He was very mannerly, she said.