Mr Justice Michael Peart: Retirement is the very last place I want to be 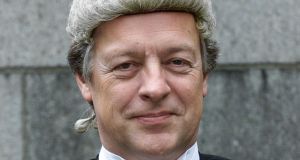 Mr Justice Michael Peart: in 2002 he was the first solicitor to be appointed a High Court judge. Photograph: Ronan Quinlan/Collins

Warm tributes have been paid to Mr Justice Michael Peart, who made history in 2002 as the first solicitor to be appointed a High Court judge, on his retirement as a judge of the Court of Appeal.

Leading the tributes on Friday, the Court of Appeal president Mr Justice George Birmingham noted his hardworking and widely respected colleague, despite being “at the peak of his powers” is a reluctant retiree, required to leave by law. He is now aged almost 70.

Mr Justice Peart is “one of the most significant judges of his generation” and, given his skills and work ethic, Mr Justice Birmingham was certain there are “further chapters” to come in his career.

In his response to the tributes, Mr Justice Peart said retirement is “the very last place I want to be” and he would much prefer to be “beavering away in my room writing a judgment”.

He had had “a blast” in his 17 years as a judge, “loved the work and loved working with all of you” and he said he would “miss it terribly”.

Becoming emotional at stages, he thanked his “extraordinary” judicial colleagues and all those with whom he had worked over a legal career of some 50 years.

He noted he and Mr Justice Garrett Sheehan, since retired, were both former solicitor members of the Court of Appeal but, with his own retirement, there will now be no former solicitors on that bench. He hoped that situation would be addressed.

He sat for the last time on Friday to hear tributes delivered in the packed Court of Appeal before senior judges of the superior courts, including the Chief Justice, Mr Justice Frank Clarke, members of the legal profession, courts service staff and members of his family and friends. Mr Justice Peart has served on the Court of Appeal since October 2014, subsequent to his appointment to the High Court where he served from 2002.

Prior to that, he worked for more than 30 years with his well-known family firm, Pearts, which acts as town agents for many solicitors, and specialised in advocacy and litigation,

He was admitted by the Law Society as a solicitor in 1970 and is also a bencher of the King’s Inns.

Attorney General Séamus Woulfe thanked the judge on behalf of the Government and people for his “long and distinguished” public service. “When one judicial door closes, another tribunal door opens,” he said.

Tributes were also paid on behalf of the Law Society, Bar Council, DPP, Garda Commissioner and the Courts Service.

Bar Council chairman Micheál P O’Higgins SC said the judge had achieved the extraordinary in being both universally popular and maintaining standards of excellence. His courtesy, sense of integrity and humanity “always shone through”.

Solicitor Damian Tansey, on behalf of solicitor clients of Pearts, said he was “bewildered by the foolishness” of an “outstanding” judge like Mr Justice Peart being forced to leave the bench.

The State would have to pay the judge’s pension from now but, if he was left on the bench for another two years, it would have taken back half of his salary in tax, he said.

Dr Michael Grimes, a personal litigant involved in many cases, thanked the judge for his unfailing courtesy towards litigants. “You won’t be short of work, there are plenty of scandals,” he added.