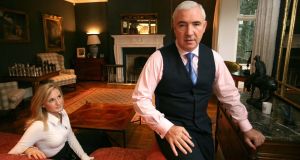 Sean Dunne with his former wife Gayle Killilea at their home in Ballsbridge. Photograph: Derek Speirs

Bankrupt businessman Sean Dunne and former newspaper columnist and socialite Gayle Killilea have recently divorced in England, according to correspondence filed in a US court.

Ms Killilea’s US attorney Peter Nolin revealed the couple’s divorce in a letter to a US judge explaining her objection to the disclosure of a confidential affidavit setting out her assets and liabilities to Mr Dunne.

She is seeking to block access to the affidavit in the long-running case taken by Mr Dunne’s US bankruptcy official who secured a court order directing that she surrender €18.1 million for the benefit of his creditors.

An Irish court was told in May 2017 that Ms Killilea was “legally separated” from Mr Dunne at that time.

The couple were married in 2004 and celebrated their wedding in a well-publicised event on the Mediterranean on board the Christina O, the luxury yacht once owned by shipping tycoon Aristotle Onassis.

Mr Dunne later claimed in his US bankruptcy proceedings that in 2005 he agreed to hand over €100 million, which he estimated was a fifth of his fortune at the time, to Ms Killilea in return for “love and affection and children,” “having a happy marriage,” “cooking the odd meal” and “washing the odd shirt.”

Facing debts of more than €700 million following the Irish property crash, Mr Dunne filed for bankruptcy in the US in 2013 and was later that year adjudicated bankrupt in Ireland as well.

A jury in a Connecticut court ruled earlier this year that Ms Killilea should return $20 million (€18.1 million) for the benefit of his creditors on the basis that Mr Dunne fraudulent conveyed assets to her.

Mr Nolin disclosed the couple’s divorce in a letter to the Connecticut magistrate judge William Garfinkel on October 11th in making his case that Mr Dunne should not have access to Ms Killilea’s affidavit on her assets.

“The court should consider that Ms Killilea has recently divorced Mr Dunne in England,” he wrote in the letter filed in a long-running case before the Connecticut courts on October 18th.

“Given that action, it should not be for this court to force Ms Killilea to turn over her confidential asset information. If Mr Dunne wants information on the assets and liabilities of his wife, he should seek it in the family courts in England.”

Ms Killilea’s attorney argued that Mr Dunne had no legal basis to obtain her personal and confidential financial information and that she rejected his requests for this information.

The letter was sent following correspondence between attorneys for the couple.

In an earlier letter, sent on October 3rd, Mr Dunne’s New York-based lawyer Luke McGrath told Ms Killilea’s lawyer that any disclosure by Ms Killilea should reflect money he claims she owes, including €11 million owed to a trust, to Isle of Man companies owed money by Ms Killilea or her Lagoon Beach Hotel in South Africa or more than $5 million (€4.4 million) on a mortgage on a residential property in Connecticut.

Mr Dunne’s attorney told Ms Killilea’s attorney in the letter that it was “a bizarre proposition” to “include assets and monies not owned or legally within one’s possession, custody and control in regard to pre-judgment relief in a sworn disclosure (or for any other reason).”

He warned that Mr Dunne would be forced to object to any disclosure of money or assets “not lawfully” belonging to Ms Killilea, which she claimed among her assets.

Mr Dunne, once one of the country’s richest men but now bankrupt in both the US and Ireland, told a court earlier this month that he lives in London now and earns just €200 a month.