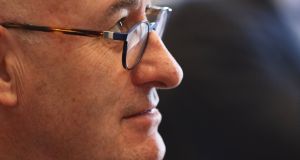 A trade deal between the European Union and the United Kingdom is unlikely to be completed before the deadline at the end of next year, Irish European Commissioner Phil Hogan has said. File photograph: Nick Bradshaw/The Irish Times.

A trade deal between the European Union and the United Kingdom is unlikely to be completed before the deadline at the end of next year, Irish European Commissioner Phil Hogan has said.

Under the withdrawal agreement — currently before the House of Commons — the UK is due to have completed a trade deal with the EU by the end of December 2020, when it will leave the bloc’s trade and single market rules. However, this deadline is widely considered unrealistic.

Mr Hogan, who will hold the trade portfolio in the new European Commission, on Friday confirmed that the trade talks — which cannot begin until the UK ratifies the withdrawal agreement — may take longer, thus raising the prospect of a postponement of the UK’s departure from the bloc’s rules.

“We’re not starting from scratch with the UK in relation to a free trade agreement,” Mr Hogan told reporters in Kilkenny. “I think we can do a deal more quickly than other trade agreements but it may take a little bit longer than December 2020. But hopefully it’ll be a lot shorter than the normal five years.

“Time will tell about the realism in the UK in relation to trade agreements but we have an objective about having seamless trade arrangements between the UK and the European Union, as frictionless as possible for businesses in order to ensure there is as [little] disruption as possible,” he said.

“The UK is a huge partner for the European Union, there’s already a significant amount of trade. But the UK does a lot of trade with the EU mainland as well. 45 per cent of all UK trade goes to their neighbours in the European Union, so the UK will be mindful of that in their negotiations.”

The former Fine Gael minister said he did not expect a no-deal Brexit, and praised Taoiseach Leo Varadkar’s Government for its contribution to the revised Brexit deal reached between the UK and EU last week.

On the agreement, Mr Hogan said it achieves the objectives set out by the EU and Ireland in relation to frictionless trade, avoiding a hard Irish border and protecting the Belfast Agreement and all-island economy.

He said “this was a very big success for the Irish Government, for the European Union and shows the great solidarity that there was with Ireland by the other 26 member states at a very difficult time for Ireland”.

He added: “There won’t be a crash-out, I think there’s a great determination not only in Europe but in the House of Commons that this will not be the case.”

Mr Hogan said he could understand farmers’ anxieties about beef from South America coming into the EU under the Mercosur trade agreement with South American nations, but that the accord would not be “fully operational for seven or eight years”.

“At end of the day, I would say to beef farmers, there is going to be opportunities outside the EU, but we also have to convince European consumers that they need to eat more red meat,” said Mr Hogan, who was agriculture commissioner when the accord was reached.