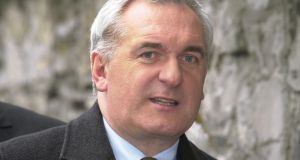 Bertie Ahern: ‘Talking through it, what are the meanings, clarifying it, understanding how it might work in practice – all of these things are helpful.’ Photograph: Brenda Fitzsimons

The EU and UK need to clarify “the lines of demarcation” on how the Brexit Border solution will work to ease concerns of Northern Ireland’s loyalists, former Taoiseach Bertie Ahern said.

It would be difficult to change the text of the proposed withdrawal deal around the dual-customs solution for Northern Ireland, but the EU and UK could improve the understanding of it, said Mr Ahern.

“Talking through it, what are the meanings, clarifying it, understanding how it might work in practice – all of these things are helpful,” the former Fianna Fáil leader told The Irish Times.

The former taoiseach called for greater clarification on the solution to avoid a hard Irish border that would push checks to Irish Sea ports, as the head of the Police Service of Northern Ireland (PSNI) said that a Brexit deal seen as threatening the union between Britain and Northern Ireland could lead to civil disorder among loyalists.

PSNI chief constable Simon Byrne said that, depending on what happened with Brexit over the coming weeks, there was a potential among loyalist communities to “bring violence back on the streets.”

A senior Belfast loyalist told The Irish Times that the proposed Border solution in the Brexit deal had alarmed loyalists and spurred talk of civil disruption and street protests in response to British prime minister Boris Johnson’s agreement.

“For the first time in the peace process I can see small visible cracks in the discipline. The message we keep hearing here amongst loyalists is that once this deal has been done, it makes a united Ireland inevitable,” he said.

“Both of those probably can’t be correct. It is trying to clarify your way around there or show where [are] the lines of demarcation and where are they drawn. Let’s put it no stronger than it is causing them concern,” he said.

The former taoiseach, along with former British prime minister Tony Blair, played an instrumental role in pushing Northern Ireland’s warring factions to lay down their arms and rival politicians to sign a peace agreement.

Mr Ahern said that it may not be possible to change the language in the Brexit deal but the atmosphere among loyalists in Northern Ireland over the proposed Brexit deal could be improved with dialogue.

“A lot of this is personality-based and friendship-based and trying to improve the general atmosphere of talking to people and helping people to remove any concerns or threats. That is always the way it is with both sides on the North,” he said.

More prominent business figures joined the growing chorus of voices concerned about the new administrative burden of filing exit summary declarations on goods moving from Northern Ireland to Britain and on the customs exportation declarations required on goods moving in the other direction under the Brexit deal.

John Allan, the president of Confederation of British Industry, speaking in Belfast, said that businesses need “urgent clarity from the UK government about how they intend to protect Northern Ireland’s place in the [UK’s] internal market.”

UK Brexit secretary Stephen Barclay moved to reassure Northern Irish businesses that checks on goods moving between Northern Ireland and Britain would be an “administrative process”.

The paperwork required would be completed digitally and in “a single form,” he said.

The deal explicitly allowed the UK to ensure “unfettered market access” for goods moving from Northern Ireland to Great Britain.

“There will be minimal targeted interventions designed to prevent, for example, trade in endangered species,” he said.

“We will work with the European Union to eliminate those limited processes as soon as possible after Brexit.”

DUP deputy leader Nigel Dodds rejected the government’s attempts to play down the paperwork required under the proposed Brexit arrangements as “administrative processes.”

“We need to avoid checks, and there will be checks, because we are going to have export declarations for trade from Northern Ireland to Great Britain,” he said.

“The Secretary of State now calls them ‘administrative processes’, but they are exit declarations that have to be checked. From Great Britain to Northern Ireland, there will be customs declarations, physical checks, tariffs on goods going to the European Union and entry summary declarations.”