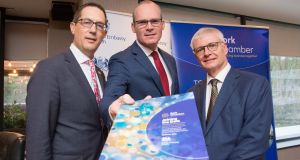 International financial services and information communications technology are two areas of economic activity in which Cork can forge closer links with the UK in the future, a new survey has found.

According to the report published today by Cork Chamber and the British embassy, there are significant economic opportunities for the UK and south west Ireland and they have agreed a programme of work to develop closer business and academic links.

Tánaiste and Minister for Foreign Affairs, Simon Coveney said the joint report, Joining the Dots – Promoting Economic Opportunity between the UK and South West Ireland, was significant, as it found 93 per cent of the respondents envisaged potential for expanded collaboration between the UK and Ireland.

“I commend the approach of Cork Chamber and the British embassy in Ireland towards promoting more impactful collaboration, so the future Irish-British trading relationship remains a positive one,” said Mr Coveney at the launch of the report, which comes as uncertainty over Brexit continues.

“The Irish Government has a strong agenda for regional growth under which the southern region is targeted for the creation of 200,000 new jobs in high- performing sectors such as financial services, ICT and agri-food.

“The importance of the trading relationship between Ireland and the UK cannot be understated. Raising awareness about market opportunities within the regions of our closest neighbour continues to be important to create additional jobs growth and prosperity in both south west Ireland and the UK.”

The British ambassador to Ireland, Robin Barnett said that the relationship between Cork and the south west of Ireland and the UK goes deeper than trade and business and also revolves around close historical, cultural and sporting connections.

“With the visit of the Prince of Wales and the Duchess of Cornwall earlier this year and the appointment of the first ever British honorary prosperity consul based in Cork, we continue to strengthen our ties with this exciting region,” he said.

“We look forward to working closely with Cork Chamber and a wide range of regional stakeholders on implementing the report’s recommendations to promote mutual future growth and prosperity and to support the Irish Government’s strategy for developing the south west in Project Ireland 2040.”

Mr Barnett’s comments were echoed by Cork Chamber CEO Conor Healy who said Ireland and the UK had developed intrinsic trading and business links through years of shared history, culture and vision and for many Chamber members, UK clients and business partners are part of everyday life.

“Against a backdrop of geopolitical change and uncertainty regarding the nature of free trade agreements, it is important that we protect and enhance current relationships,” said Mr Healy, adding that with Cork set to become Ireland’s fastest growing city, it was well placed to capitalise on such links.

Some 87 people responded to the survey, 65 per cent of whom were from Ireland and 35 per cent from the UK. To supplement it, Cork Chamber carried out indepth interviews with 37 key organisations split 50/50 between Ireland and the UK.