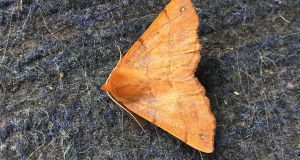 I spotted this unusual coloured moth and I’m curious to know what it is. – Roger Walsh, Dunmore, Co Kilkenny
It’s the feathered thorn moth, which flies from September to November.

My daughter and I saw this turtle shell on the beach at Ballyconneely. What type is it? – Gráinne Waters, Ballyconneely, Co Galway
It is the very worn carapace of a leatherback turtle.

I saw this poor fellow outside on the road; looks like it was hit by a car. It had a totally cream-coloured coat. Is it a stoat? – Erika Tyner, Bray, Co Wicklow
It’s a weasel, cousin of the stoat. There are some feral weasels in the northeast of Ireland. This one could have been a pet that got lost.

I found this beauty on a pathway here in the Burren. What are the white marks? – Frank Folan, Ballyvaughan, Co Clare
It is a dor beetle, which buries its prey. The white marks are mites.

I found seven colonies of snowdrops, some a ½-inch tall, and two cowslips in bloom (out of 17) under leaves. – Eugene O’Connor, Paupish, Co Carlow

I took this photograph of an unexpected water rail at the junction of Dungriffin Road and Grey’s Lane. – Francy Devine, Howth, Co Dublin