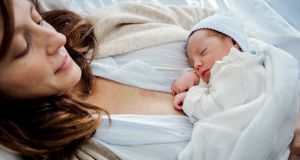 Rates of caesarean sections tripled worldwide between 1990 and 2014 from 6.7 per cent to 19.1 per cent. Photograph: Istock

More than three quarters of all caesarean sections carried out in Ireland and the UK are carried out following a request from the mother, newly published research suggests.

International research shows that rates of caesarean sections tripled worldwide between 1990 and 2014 from 6.7 per cent to 19.1 per cent.

Maternal requests were cited by 77 per cent of obstetricians in the UK and Ireland as among the main reasons to perform caesarean sections.

Litigation was another major factor in the decision to opt for caesarean sections, with 67 per cent of obstetricians in UK and Ireland citing as it as significant.

Researchers at the School of Nursing and Midwifery in Trinity College Dublin (TCD) have carried out a major review of all the international literature related to caesarean sections.

They reviewed 34 international studies conducted in 20 different countries and found a cultural difference between obstetricians and midwives .

Obstetricians are perceived as being willing to perform caesarean sections because the procedure is regarded as “organised, orderly, convenient and controlled” compared to vaginal births, where they need to be available 24 hours a day.

Midwives, by contrast, believe convenience is a cause of unnecessary caesarean sections.

The rising rate of caesarean sections worldwide, despite the evidence that vaginal birth is safer and associated with fewer complications, is a growing concern among healthcare professionals.

The research found patterns across the world in which maternal fears of giving birth naturally and fear of litigation were the driving force behind the increase in the number of women giving birth by caesarean section.

Over half of all US obstetricians (54.6 per cent), attributed the women’s request for a section mainly to complications from previous birth (83.9 per cent), and maternal anxiety (71.4 per cent).

One midwife said that women lacked the confidence to give birth naturally. She is cited in the literature as stating: “There are a lot of women who are afraid of everything. They have no trust in their bodily functions or that we are made to give birth.”

Lead author Sunita Panda said the research is the “first systematic review” of the international research on the topic and delves into the reasons why rates of caesarean sections are on the increase.

“It gives important insight into the ‘why’ behind the rising rate of caesarean sections,” she said. “Our study identified the significant influence of ‘fear of litigation’ on clinicians’ decision to perform caesarean sections, irrespective of hospital setting, age, gender, professional experience, resources and culture within the health care system.”

Prof Cecily Begley, the chair of Nursing and Midwifery in Trinity College Dublin, and co-author of the paper, said she hoped there will be “significant benefit” to policy-makers seeking to improve and promote normal births and reduce caesarean section rates.

Obsetrician prof Michael Turner warned that caesarean section rates have not yet plateaued and are approaching one in three births in Ireland.

“If we are to reverse this trend nationally, we need to better understand the complexity of the decisions made by women and their obstetricians.”