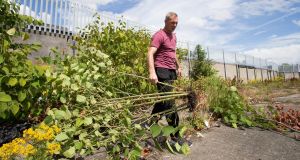 Gerry Scully who lives beside the site where Japanese knotweed is growing at O’Devaney Gardens off the North Circular Road, Dublin. Photograph: Tom Honan

Dublin City Council has declined to say how long it has been aware of the growth of Japanese knotweed on land it owns near the Phoenix Park or to outline any steps it has taken to tackle the problem in recent years.

The spread of the most “aggressive, destructive and invasive plant” in the Dublin suburb of Stoneybatter has sparked concern among local homeowners, while public representatives and councillors have accused the council of failing to deal with it in a coherent fashion.

The council has begun spraying Japanese knotweed on the O’Devaney Gardens site off the North Circular Road in recent days, but warned local homeowners they would have to pay private contractors to tackle the weeds on their own properties.

The costs associated with such treatments can run to thousands of euro and can take several years to complete. Unless there is a concerted and co-ordinated approach the invasive species can easily take root again, making it difficult to sell a property or secure a mortgage on one.

A report authored by environmentalist Dr Niamh Roche almost 10 years ago highlighted that the weed was growing “in a couple of locations in O’Devaney Gardens”.

It said that “during site clearance there is potential for further spread of the invasive shrub species Japanese knotweed. This shrub occurs to the north of the site. Ideally this plant should be sprayed during the growing season with a glyphosate herbicide and dead stems should be removed. The base of the plant should be further treated with herbicide prior to removal or spread of soil around its base.”

When asked what steps it had taken to deal with the problem in 2009 and in subsequent years, a spokeswoman for the council’s housing department said there was “no comment”.

He said he was “concerned” the problem was not being addressed with sufficient urgency. “I feel more resources need to assigned to tackle this problem, and the council needs to sit down with the adjacent property owners and take action immediately.”

Meanwhile a site earmarked for social housing in Sandyford has also been identified as having a significant Japanese knotweed problem.

The site at Enniskerry Road was transferred from Dún Laoghaire-Rathdown County Council to the Housing Agency in 2010 under the Land Aggregation Scheme. “As the eradication of Japanese knotweed requires specialist treatment, the council appointed an experienced invasive species specialist to advise on removal specification including biosecure disposal of soils containing Japanese knotweed rhizome at a licensed landfill,” a spokesman told The Irish Times.

He said the council had been working with the Housing Agency to progress the development of this site.

“The removal and disposal of Japanese knotweed has been included in the works requirements to be tendered. The disposal will be carefully supervised by qualified personnel to ensure full chain of custody through works to prevent spread of knotweed plants through implementation of an invasive species management plan.”