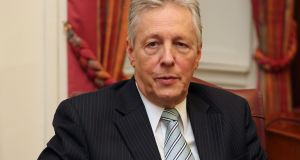 Former Northern Ireland first minister Peter Robinson’s has been accused of becoming a “Sinn Féin echo chamber” after suggesting that preparations should be made for the possibility of a united Ireland.

The UUP chairman said his comments played “into the hands of our country’s opponents” while a DUP MP said the remarks were valid but that Irish unity “isn’t going to materialise”.

Speaking at the MacGill Summer School in Glenties, Co Donegal on Friday, Mr Robinson said he did not think Northern Ireland would want to leave the UK but that was no reason not to prepare for the eventuality.

“I don’t expect my own house to burn down but I still insure it because it could happen,” the former DUP leader said.

He said he would accept the results of a Border poll if it led to Northern Ireland and the Republic uniting. “As soon as that decision is taken every democrat will have to accept that decision.”

Mr Robinson said he believed the unionist community in general would also accept the result but would want some “protections”, as the nationalist community currently enjoys in the North.

‘Music to the ears’

Responding to his remarks, Ulster Unionist Party chair Lord Reg Empey said Mr Robinson’s comments would be “music to the ears” of the Irish Government and republicans more widely.

“After his last outburst at Queens University where he called for a divisive border poll to be held every generation destabilising Northern Ireland in the process, he now trumps that with this,” he said.

“He is becoming a Sinn Féin echo chamber. This is not strategic thinking, rather it’s the latest in a long line of proposals from Peter Robinson that are detrimental to Northern Ireland...”

Lord Empey said DUP leader Arlene Foster “needs to make her position clear” on Mr Robinson’s comments and explain if she either agrees with him or is keen to completely disassociate the party from the notion.

“It is truly hard to fathom that a former senior unionist could be coming out with these sorts of comments when our national government is in the middle of intense negotiations about the UK’s departure from the EU, where the EU and the Republic’s Government are using Northern Ireland as a political football to try and leverage more concessions from the United Kingdom, ” he said.

“Peter Robinson is playing into the hands of our country’s opponents.”

DUP member Gregory Campbell, an East Derry MP and former Stormont minister, said Mr Robinson “is right in terms of the analogy of the insurance policy. He is right in that sense.”

“I think his explanation about the insurance policy is a valid one,” he said. “Many, many people take out insurance policies for issues that never come about. But you take it out for the possibility that it might. So that is a relevant point.”

However, Mr Campbell said he did not see any advantage in opening up a discussion about “something that isn’t going to materialise”.

“There is no concept of Britishness in the Irish Republic, so there is just no possibility of a united Ireland happening. It is out of the question,” he said.

The DUP has traditionally been opposed to any connections with the Republic and Mr Campbell insisted his former leader’s remarks said nothing about the journey his party is on.

Mr Campbell declined to say whether he would accept a democratic vote on a united Ireland, because if he answered that he would “be doing what I have suggested people shouldn’t do”.

“Why would I sit down and start to rationalise and talk to people about how our Britishness is going to be accepted in a new whatever it is, united Ireland or federal Ireland. It would be an impossibility.”