Students ‘losing out’ on tuition time due to dispute 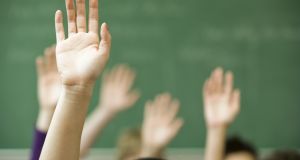 Secondary school managers have warned the Department of Education that time-tabling meetings during class time will lead to a ‘staggering’ loss of teaching hours. Photograph: iStock

Thousands of secondary school students are losing out on tuition time due to an escalating dispute over whether teachers’ professional collaboration meetings should take place during class time or not, school managers have warned.

The country’s biggest secondary teachers’ union is likely to formally direct its members shortly to only attend meetings relating to junior cycle reforms which are scheduled to take place during the normal school day.

This follows a vote last week by members of the Association of Secondary Teachers Ireland (ASTI) to authorise the union to issue a directive on when Subject Learning and Assessment Review (Slar) meetings should take place.

It is understood that many schools have recently been advised by school managers to timetable these meetings to begin during the normal school day in an effort to diffuse the row as a temporary measure.

A spokesman said the Department of Education declined to comment on this except to say it was continuing to engage with teachers’ unions “to clarify arrangements for the implementation of Slar meetings in schools”.

Secondary school managers have warned the department that routinely time-tabling these meetings during class time will lead to a “staggering” loss of teaching hours and put schools in an “impossible position”.

The Joint Managerial Body (JMB), the school management body for more than half of secondary schools, estimates that allowing these Slar meetings to start during class time would lead to the loss of more than 133 hours of tuition time every year in a medium-sized school.

In addition, this would lead to higher substitution costs and rising parents’ concerns around multiple “free classes” as well as student discipline issues.

Any move to have the entirety of these meetings held during class time, it says, would represent a loss of four teaching hours per teacher per subject each year.

It says it would be twice that if, as is the case with the majority, teachers have a second subject.

The current dispute dates back to a 2015 agreement struck between the department and teachers’ unions.

It states that “a limited number of meetings may need to draw on teachers’ bundled time to run beyond normal school tuition hours for some of the duration of the meeting”.

The ASTI says many schools have been scheduling these meetings outside teaching hours and teachers were being put under pressure to attend them by school managers.

The union’s central executive committee has previously formed the view that such meetings must be scheduled to “start and end within normal school tuition hours” and only a limited number may run over.

Until relatively recently only a small number of teachers were involved in these Slar meetings.

However, the roll-out of Junior Cycle reforms means that more and more teachers are required to attended these meetings.

A typical subject teacher is required to attend two Slar meetings a year: one for second year students and another for third years.

The JMB says a failure to achieve a renegotiation or an agreed reinterpretation of rules over the timing of Slar meetings will result in some schools not being in a position to operate them.

This, it says, will cause friction between staff and principals and will “erode the whole intention of junior cycle reform”.

In addition, it says it would create a “Slar substitution precedent” which will only escalate and “from which there will be no return”.

This, it says, will alienate both teachers and management from the junior cycle enterprise.

‘Mathematics seems too often to be about learning rules’