Burglars’ secrets: ‘I love creeping around houses when people are in bed’ 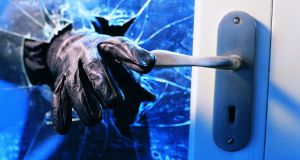 “A lot of the houses I would hit weren’t in Dublin, they’d be rural. The next neighbour would be three fields away. But if they’re farmers and they catch you, some of them would shoot you, you know?”

So begins Frankie’s account of life as a burglar in Ireland.

“I’d only really hit houses for certain things that I’d be interested in, jewellery and money. I’ve gone into houses and gotten thousands, hidden in socks even.”

While he would monitor families coming and going from houses he was considering breaking into, he said instinct played a huge part when making a final decision.

However, that gut instinct did not always work as a homeowner confronted him once as he crept around a house one night, hitting him with a pole off a hoover. Frankie “warned him to stay back” by brandishing a hammer before running out.

When he was in the worst of his drug addiction he broke into houses owned by people he knew; at times gaining access with a key he knew was concealed in the back garden, netting more than €10,000 in cash on one occasion.

“On one of those jobs I brought a runner [sports shoe] with me and left a print from that on the window and broke the glass to make it look like a real break-in.

“You say to yourself ‘I’m doing this for money for drugs’ but the burglaries themselves become an addiction. And you also get addicted to the money.

“I used to love creeping in the rooms and being so close to the person, especially if they were asleep. They’d be in the bed and I’ve be crawling around on the floor pulling their trousers over to me [looking for money]. I loved that.”

Dublin homes in general were better secured and were now much harder to burgle.

“For a start there’s no way I’d break into any houses in Sheriffer [Sheriff Street] or Summerhill [both in north inner-city Dublin] because you don’t rob your own people. And you won’t rob houses in, say, Dalkey [on Dublin’s southside] or any of them places. The security is too good now, it’s all digital; cameras on the doorbell even. But if lads know how to cut wires and that, you can get around it.”

He added he had set off alarms deliberately and then hidden away waiting for gardaí to arrive to check the property and leave, often repeating it several times. The responding gardaí then decided the alarm sounding was “due to a fault” before leaving for the final time and not returning, thus creating the break-in opportunity even on a heavily-alarmed house.

“It’s sad to say it, but if I’m in your house and you wake up and hit me with a hammer or whatever, you’ll get done [prosecuted] more than me.”

Share your story: Have you been a victim of a burglary?

“My first sentence was when I was 13. I got caught carrying a f**king telly out of a house. I got sent to St Laurence’s [industrial school] in Finglas. I learned more there than anywhere.

He believed it was no coincidence burglary rates were falling while drug dealing was now strongly increasing.

The Garda’s anti-burglary drive, Operation Thor, in focusing on repeat offenders and putting more resources into solving burglaries, had since 2015 made the crime higher risk for burglars. Furthermore, Frankie said, the improvement in home security, especially in Dublin, had made burglaries much more difficult.

Meanwhile, drug dealing was becoming easier and more lucrative as the economy recovered and increasing disposable incomes were driving a much higher demand for drugs.

Frankie believed those changes were resulting in more burglars moving into low-level street dealing, further accelerating the drop in burglaries and the resurgence in the drugs trade.

“It’s like everything in life, people will take the easier route. If it’s getting harder to rob houses they’ll move to selling drugs. If you’re selling drugs on the corner, on the streets, that’s easier than breaking into houses.”

Jock, a Dubliner in his late 30s, says his most lucrative burglaries were organised “robbing to order” crimes. These involved people in the criminal fraternity monitoring auctions to identify people buying expensive antiques. Their address would then be established and that information, along with a request to steal a specific piece, would be relayed to Jock.

“Then it would be down to me to scope the house out, see what time it was empty. I’d go back [at] the same times every day for a while to check it, especially if they have kids. Oh, I’d have my homework done. But I’d only need a few minutes to actually do the job.”

Jock said if the house was in a rural area, burglaries were less stressful “because you have at least five minutes” before gardaí could respond to an alert.

“You know what, I do have morals. I wouldn’t rob from my own. It’s against my religion and my brothers would kill me anyway. And I’d always try to do as little damage as possible breaking into a house.

“I know someone who specifically goes on his nightly prowls and checks people’s back doors. There are people who forget to lock their back door when they are rushing around. And the gaff is there for easy pickings.

“I don’t do it any more since I got clean, clean of heroin and cocaine and that. Now I do still take a few tablets, and I’m like anyone else, I enjoy me few doobies [marijuana cigarettes].”

Aside from being commissioned to steal antiques, cars were always in demand. He would break into a house with the specific goal of securing the car keys and driving away in the vehicle parked outside.

The vehicle would be provided to another, more senior criminal, and usually “cut and shut” – stripped of its parts to wipe out any trace of the stolen vehicle they came from.

“You’d do a cut and shut on a car in minutes, I saw it being done on a halting site once. I drove the car in, I got my €3,000 off the boys and in minutes they had every bit of the car cut off, doors, windows, interior, everything, out. They put it on to another car, something that was crashed and is not supposed to be on the road. The chassis number is often on the car rather than the engine but nail varnish remover can take if off windows or bodywork. I’d always have gaffs sussed, where the cars are, where the jeeps are.”

He said he once stole Nike sports clothing valued at about €15,000 from a warehouse and sold it in one batch for €5,000.

“I wouldn’t even keep a tracksuit for myself from a robbery like that. I’d sell every last item and then go in and buy something and get a receipt.”

On another occasion he broke into a cash-and-carry wholesaler and filled duvet covers with thousands of boxes of cigarettes and “just walked out the door with these two duvet covers as sacks full of smokes”.

When driving away from one robbery in rural Ireland, Jock said that he and his accomplice became convinced they were being pursued by the gardaí. Their priority was to “cook up” and inject the heroin in their possession before the gardaí caught and arrested them.

“You didn’t want to be locked up for 12 hours or whatever and not have any gear in you. So the other fella cooked up in the gear in the back and we took it in the car,” he explained.

However, on that occasion he soon realised the pursuing vehicle was a lorry being driven at speed rather than a patrol car.

“I know it sounds mad, an electric fence even caught me on the balls as we were trying to get away from that house. But when we eventually pulled in by the side of the road I have to say I broke my b*****ks laughing, I’m not going to lie to you.”