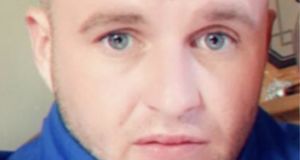 Keith Greaney, who was attacked by three men at the home he shared with his girlfriend Nicole O’Leary in Dunard, Lotamore, Mayfield, Cork. Photograph: Provision

The family of a Cork man who was doused in petrol and set alight have dismissed any talk of seeking revenge and said they are happy for the Garda to secure justice .

Shane Greaney told of the family’s shock and upset after learning that their cousin Keith Greaney (23) was attacked by three men in his home at Dunard in Mayfield in Cork at about 4am on Monday.

The three men broke into the house and attacked and father of three young children, with a machete before dousing him in petrol and set him alight in front of his partner, Nicole O’Leary who raised the alarm.

Mr Greaney was taken by ambulance to Cork University Hospital where doctors treated him for severe burns to his head and chest before putting him in an induced coma.

On Friday, Shane Greaney told The Neil Prendeville Show on Cork’s Red FM that his cousin was in great pain and hugely distressed as a result of the attack when he woke up from the induced coma on Thursday.

“They put him into the coma first day because he was in so much pain. He’s very badly burned, his face and arms so he’s facing skin grafts for those injuries and these are life-changing injuries.

“Keith is going in for surgery on his hands today because they also attacked him with machetes, they cut his hands when he put his hands [UP]to try and protect himself and save his face and they cut all his hands.”

Mr Greaney said his cousin became hugely distressed and tried to get out of hospital when he woke up from the induced coma . He said the family is also very worried about his mental wellbeing.

“They (the medical staff) put him back into an induced coma and they want him to get him assessed through the psych ward because it’s going to affect him mentally now when he does come around again.

“He has an infection on the lungs that they reckon is from the smoke inhalation and that was one of the reasons, they put him back in the coma because they were afraid he might end up getting a pneumonia. “

Mr Greaney said that whole incident has been hugely traumatic for the entire family in particular his cousin’s young children who have not been able to see their father since he went into hospital and was put in the induced coma.

He said that he and his family believed that his cousin’s attackers were trying to kill him and some in the family were fearful that those responsible may do something similar to others. However, he insisted his family were not seeking revenge.

“Other people say that they want revenge …. We just want to leave it in the hands of the gardai - we don’t want to cause any more trouble - two wrongs don’t make a right and it’s a true saying.

“For us to go down and retaliate, not that we want to do, it’s not going to solve anything, it’s just going to cause more trouble - that’s what the guards are there for,” he said.