Former Seanad member fell out with Charles Haughey, had a blazing row with Garret Fitzgerald and felt let down by Bertie Ahern 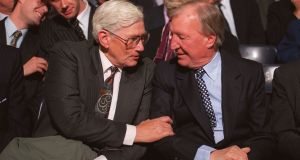 Seamus Mallon and Charles Haughey during the Fianna Fáil ard fheis in the RDS, Dublin, in November 1995. Photograph: Frank Miller

Charles Haughey never spoke to Seamus Mallon again after the SDLP deputy leader came out strongly in support of the Anglo- Irish Agreement negotiated by Garret FitzGerald in 1985.

Up to that point, Mallon had regarded Haughey as a far closer political ally than FitzGerald but all that changed once he criticised the Fianna Fáil leader’s negative dismissal of the Agreement.

“When he came back to power in 1987, Haughey was pragmatic and rowed back from his initial opposition to that Agreement but he did not forgive me for my earlier support for it: after that there was no more contact between us,” Mallon recorded in his memoir, A Shared Home Place.

Only a few years earlier, Haughey had appointed Mallon to the Seanad to represent Northern nationalist opinion in the Oireachtas. When Fianna Fáil returned to power in 1982, Haughey’s adviser Martin Mansergh turned up out of the blue with the offer of a nomination as one of the Taoiseach’s 11.

His term only lasted as long as the nine-month Haughey government of 1982. When Fine Gael came back to office at the end of that year, FitzGerald did not offer to reappoint Mallon but instead appointed his SDLP colleague Bríd Rodgers to the Seanad to speak for Northern nationalists.

Mallon had always regarded himself as much closer to Fianna Fáil than Fine Gael. He identified with Fianna Fáil’s commitment to a united Ireland and felt more at home with people from the party who shared his political viewpoint and his passion for the GAA.

By contrast, he found himself at odds with FitzGerald during the New Ireland Forum as he felt the Fine Gael leader was downplaying the aspiration to Irish unity. The apparent bugging of the house where he stayed in Dublin and FitzGerald’s account of it in the Dáil led to a serious row between the two men.

He did get on much better with Fine Gael deputy leader and minister for foreign affairs Peter Barry. “I always got on well with Barry. He was the southern politician who first used the phrase ‘the nightmare of Northern nationalists’. If people said we were both old-fashioned Irish nationalists, I would take that as a compliment.’

Row with FitzGerald Following his row with FitzGerald, Mallon was excluded from the discussions that led to the Anglo-Irish Agreement. Nonetheless, when it was unveiled, Mallon gave it his unreserved backing as he regarded it as a great step forward. The Irish Press said he had done the best sales job for the agreement of any constitutional nationalist politician.

In the 1990s, Mallon played an important role in negotiations with unionists in the run-up to the Belfast agreement, particularly in the Strand One talks which dealt with the internal political arrangement for Northern Ireland, but he was never particularly close to Bertie Ahern.

He argued with Ahern and Tony Blair that IRA decommissioning was an urgent necessity and he felt Sinn Féin was “pampered” by the two governments. “I know there was some sympathy for my views in government circles in Dublin but Bertie Ahern, backed by senior officials like the secretaries of the Department of Foreign Affairs and Justice, Dermot Gallagher and Tim Dalton, believed that by far the most important thing was to keep the IRA and Sinn Féin on board.”

In his book, he records a strange episode preceding his appointment as deputy first minister.

He was playing golf in Kildare when he was told Ahern needed to see him urgently and he was whisked off in the taoiseach’s car for a meeting in Government Buildings. “We had a brief chat but to this day I don’t know why he wanted to see me,” he wrote in 2019. Two days later, he was shocked to be told by John Hume that he was going to be deputy first minister.

Ultimately, he felt Ahern let down the cause of constitutional nationalism. “I had got the feeling even when I was deputy first minister that the Irish Government was making plans to abandon the SDLP for Sinn Féin and the British Government to leave the Ulster Unionists for the DUP.”