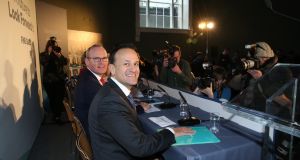 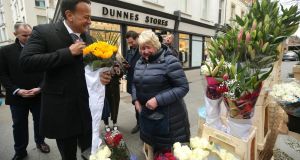 Fine Gael has promised to cuts taxes by €600 million a year, hire thousands of public servants and invest billion of euros in public services over the next five years if re-elected to government.

Launching the party’s manifesto in Dublin, Taoiseach Leo Varadkar again acknowledged that the Fine Gael-led government had made mistakes, but said he had learned from those mistakes and pledged to deliver improvements in childcare, create 200,000 new jobs and tackle the housing crisis.

Making tax cuts one of the centrepieces of his party’s appeal to the voters, Mr Varadkar said that only Fine Gael would deliver tax cuts for what he termed the “squeezed middle”.

He said that without Fine Gael’s tax cuts, the people would end up paying more in tax.

“If people vote for other parties, they are going to pay more tax in real terms,” he said.

He said the proposed tax cuts were a policy “for the many not the few, maybe a million people will benefit from this”.

The vast bulk of the tax package will be spent on the increases in the threshold for the higher rate, meaning workers will pay more of their incomes at the standard rate of tax, and less at the higher rate.

However, there will also be reductions in the USC for workers on the minimum wage and changes to inheritance tax which will see those who inherit cash or assets worth up to €585,000 will pay less in tax.

However, Fine Gael will spend most of the available cash on public services and investment, with the ratio of tax cuts to public spending increases at 4:1, said Minister for Finance Paschal Donohoe.

Fine Gael has promised to spend a billion euros a year more on the health budget, thus using up a significant chunk of unallocated resources available to the next government, assuming economic growth continues.

Tánaiste and Minister for Foreign Affairs Simon Coveney warned that spending commitments by all parties were “aspirational, and not a whole lot more than that” if there was no trade deal between the UK and the EU at the end of next year.

“Ireland is about to have some difficult choices to make” in the next phase of the Brexit negotiations, he said.

“I know Micheál Martin better than most,” Mr Coveney said. “He is not the person I want leading Ireland into the second half of the Brexit process.”