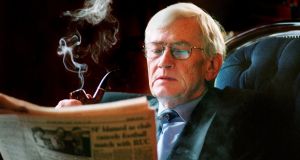 Mallon has died at the age of 83, the SDLP has announced.

One of the most important figures in Irish politics during the decades of violence in Northern Ireland, Mr Mallon served as deputy to John Hume for two decades and was a fearless critic of republican violence.

However he was also a hate figure for many unionists because of his criticism of discrimination against nationalists as well as of the actions of the RUC and the Ulster Defence Regiment.

His description of the Belfast Agreement as “Sunningdale for slow learners”, in reference to those who had opposed the Sunningdale agreement in the 1970s, was one of the most famous phrases to emerge from the decades of violence and turmoil in Northern Ireland.

Although he lived in predominantly Protestant Markethill, in Co Armagh, where he was a former school headmaster, he always refused police protection.

Seamus Mallon was an Irish Patriot. He lived for our country and has left an indelible mark on the lives of everyone who enjoys the peace he helped forge.

I'm proud to have called him a friend. My prayers are with Orla, Mark and Lara. https://t.co/aU9mJRJwB6 pic.twitter.com/QO7Dy3Fi9S

Mr Mallon was widely admired for his courage, tenacity, and the voicing of his strongly held opinions about those who engaged in, and encouraged, political violence.

He became involved in politics when he took an interest in housing and civil rights generally.

Mr Mallon did not contest his seat in the Stormont Assembly in the 2003 elections, and stood down at the 2005 Westminster election.

The leader of the SDLP, Colum Eastwood MP, said Ireland has lost one of its most fierce champions for justice, equality and peace.

“Seamus Mallon’s life’s work carved a pathway beyond our troubled past and gave us all the opportunity to build a shared home on our island,” he said. “Seamus Mallon was a force of nature.”

In the darkest days of conflict, “when hope was in short supply”, Mr Mallon had represented “the fierce thirst for justice” that ran through the SDLP and through communities that had lost so much to political violence, he said.

“I joined the SDLP because of people like Seamus Mallon. His absolute opposition to the murder and maiming of our neighbours, his immense work to reform policing and deliver a new Police Service that could command the support of our entire community, and his unrelenting commitment to making this a place we can all call home inspired so many young SDLP members.”

Mr Mallon’s contribution to Irish politics continued up to last year, when his book, A Shared Home Place, which he wrote with journalist Andy Pollak, was published.

In the book he argued that a simple majority in any future border poll would not deliver a united Ireland that was peaceful and stable.

Rather, he argued, a united Ireland should not be contemplated until at least a substantial minority of the the Protestant population in Northern Ireland were in favour of it.

He was predeceased by his wife, Gertrude, in October 2016. He is survived by his daughter Órla, grand-daughter Lara, and son-in-law Mark.