Issues of domestic violence and abuse affect ‘hundreds of thousands’ 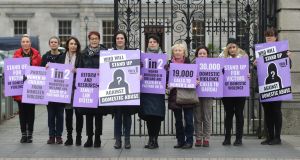 Sarah Benson (centre), chief executive of Women’s Aid, and her colleagues launch their manifesto for general election 2020 outside the Dáil in Dublin on Friday. Photograph: Damien Eagers/The Irish Times

Women’s Aid has called for parties contesting the general election to make domestic violence a central theme of their manifestos.

At a gathering outside Leinster House on Friday afternoon Women’s Aid chief executive Sarah Benson said the issue of domestic violence affected “hundreds of thousands of women and families” and yet was not a headline issue in the general election.

She asked voters to question candidates on the doorsteps as to their attitudes to domestic violence, before committing their vote.

Saying “domestic violence and abuse is a crime” she said said it “can result in stress, short and long term trauma and physical injuries, an in extreme cases, death” but was not seen as a priority for most candidates.

Ms Benson said the issue was one of “serious public safety” and pointed to recent Garda statistics which showed the force got up to 30,000 calls a year in relation to domestic violence.

“Our own national freephone helpline and other support services responded to more than 19,000 contacts in 2018,” she said.

“We need the public to ask their candidates key questions when they come canvassing”, she said. “ As of yet we are unaware of any party manifesto which addresses domestic violence completely”.

“We need to see real proposals to improve supports for women and children. We need a Government and elected representatives that will transform the system tasked with providing safety and protection for victims. As of yet, we are unaware of any party manifesto which addresses domestic violence comprehensively,” she said.