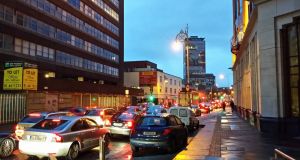 The Government’s “climate inaction” will cost the exchequer some €7.6 billion this year, according to an analysis released by the Green Party on Friday.

The figures show the effects of climate change is costing large amounts of money and “isn’t just bad for the planet, it’s also bad for our pockets”, said Green Party climate spokesman David Healy, a candidate in Dublin Bay North.

Health is the single biggest cost, according to the party’s evaluation with independent sourcing. It finds poor air quality (mainly due to urban traffic and solid-fuel burning) is costing €2.6 billion per year, when health-related effects, lost work days and 1,600 premature deaths annually are factored in.

In reference to Fine Gael, Mr Healy said, “you can’t claim to be a party of fiscal responsibility and rectitude and stand over this level of waste”.

The cost of inaction was being felt mainly in housing and transport which are sectors where “health benefits match climate benefits”, said Mr Healy. He was speaking at the party’s launch of “what is the cost of doing nothing on climate change?” in Dublin.

“What we want to highlight are the major economic benefits of tackling climate change. Retrofitting homes ends the need to support people in fuel poverty and makes them healthier. Tackling emissions in transport improves health. Meeting our emissions targets will stop carbon fines,” he said.

The party says traffic congestion is costing Dublin close to €500 million, rising to €2 billion by 2030. The report is critical of State subsidies for fossil fuels and support for peat extraction through the Public Service Obligation levy “which is completely at odds with the Government’s commitments to reduce emissions” .

The Green Party finance spokeswoman and candidate for Dublin Central, Neasa Hourigan, said the State will have to pay €150 million in carbon credits and fines this year for failing to meet its 2020 climate targets. The State paid €125 million last year for not honouring its commitments.

She said big success in the eyes of Fine Gael was Ireland moving up one place on the climate-change performance index in Europe. Yet it continued to be in second-last place in rankings after Poland.

Green MEP Ciarán Cuffe said the cost of inaction, such as sub-standard, damp housing and air quality could be measured in people’s lives. Acting now would lead to “healthier, longer lives” while reducing emissions to the scale necessary.

On transport, this necessitated spending one-fifth of the capital budget on “active travel”(cycling and walking), he said.

In response to Fine Gael proposals, Ms Hourigan, said: “It’s just words . . . We need climate action. It gives the impression we are all just a number; it’s not reflective of how people are living their lives. I don’t get the impression they’re actually being forced into a car and travelling 2½ hours everyday and missing time with their children.”