Protocols are in place to guide emergency services in dealing with any suspected cases, and airports have been alerted 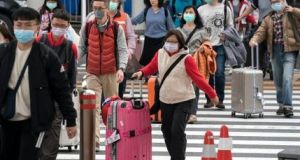 Chinese tourists at Narita airport in Japan. Japan is one of the most popular destinations for Chinese tourists during the Lunar New Year holiday. Photograph: Tomohiro Ohsumi/Getty Images

The threat to Ireland from the new flu-like virus that has killed 26 people in China remains low, according to the Health Service Executive (HSE).

As 14 people tested for the coronavirus in the UK were given the all-clear on Friday – including one patient in the North – the HSE said the likelihood of a case reported in the EU resulting in secondary cases within Ireland was low.

The HSE’s Health Protection Surveillance Centre (HPSC) said that while there was a “moderate” likelihood of detecting cases imported into EU countries, it was important to note that Ireland had no direct flights to Wuhan, the Chinese city where the virus originated.

Health sources said there were no cases suspected to involve the new virus reported in the Irish health service on Friday.

The HPSC, in an update, cautioned that outbreak investigations were ongoing in China, and it remained an “emerging, rapidly evolving situation”.

The new coronavirus, known as nCoV-2019, first appeared in Wuhan in late December, but cases have been detected in eight Asian countries and the US. It has killed 28 people, and infected more than 900.

Chief medical officer for England Prof Chris Whitty said on Friday that while all 14 people tested for the virus in the UK were clear, checks were continuing on other people.

He said the risk to the UK public remained low, “but there may well be cases in the UK at some stage”.

“We have tried-and-tested measures in place to respond. The UK is well prepared for these types of incidents, with excellent readiness against infectious diseases.”

The new coronavirus appears to be capable of spreading from person to person and between cities, according to new findings.

In two studies published in the Lancet, scientists also report the virus can cause symptoms similar to severe acute respiratory syndrome (Sars) such as fever, a dry cough and shortness of breath.

However, the absence of some symptoms typically found with Sars, such as a runny nose, sneezing or sore throat, may make the new virus harder to detect.

In Ireland, HSE officials have said protocols are in place to guide emergency services in dealing with any suspected cases, and airports have been alerted to the threat posed by the virus.

Under the case definition being applied, anyone with a respiratory infection who has been in Wuhan over the past 14 days or was in close contact with someone who has the virus may be classified as a possible case.

The World Health Organisation has held back from classifying the virus as an “international emergency” for now, but says this may yet happen.