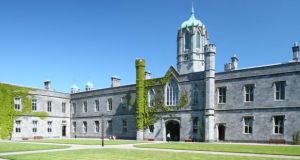 In a statement NUI Galway said as a ‘University of Sanctuary’ it ‘will not tolerate racism and find any incidence of racism abhorrent’.

An investigation has been launched into a racist exchange on a university campus in which a man repeatedly referred to a woman using offensive language about her colour.

The verbal assault took place at NUI Galway whose management have requested Garda assistance, insisting such behaviour would not be tolerated.

The victim of the tirade appears to have begun filming the man who can be seen telling her to “go back to her own country” despite her telling him she was Irish and repeating the appeal: “Don’t talk to me like that”.

The video footage was then posted on social media with the comment: “Ireland’s not racist?? I was in Galway minding my own business, then this happened.”

At one point the middle-aged man - dressed in black with sunglasses and a backpack - appears to be confronted by a passing cyclist.

Ignoring him, he continues to direct racist language at the woman as he walks away.

In a statement, NUI Galway said it had contacted gardaí about the incident.

“As a University of Sanctuary, respect and openness are our core values. We do not and will not tolerate racism and find any incidence of racism abhorrent,” it said.

“As an educational institution, we are taken aback at such attitudes on our campus and will pursue all avenues to reject and eradicate racism and to support members of our community and our society who are subjected to such wholly unacceptable behaviour and attitudes. This matters to us all.”