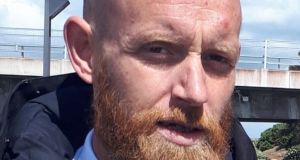 Gary Dineen, a father of two, was originally from Herbert Park Lawn in Montenotte in Cork.

A homeless man whose body was found near the entrance to a car park in Cork city centre spoke last month on the radio of the challenges of living on the streets during the Covid-19 pandemic.

Gary Dineen (35) was found dead near the entrance to Merchant’s Quay car park on Parnell Place in Cork on Wednesday. Gardaí say they are keeping an open mind on the circumstances of his death following a postmortem examination and have appealed for any witnesses to contact them.

On July 13th, Mr Dineen, a father of two originally from Herbert Park Lawn in Montenotte in Cork, contacted 96FM’s Opinion Line and spoke with presenter PJ Coogan about how he had ended up homeless and the challenges homeless people faced since the outbreak of Covid-19.

In particular, Mr Dineen spoke about how the number of spaces available under the Nightlight emergency service provided by Cork Simon in co-operation with Cork City Council had been cut back due to Covid-19.

Using the pseudonym, James, Mr Dineen, who had addiction issues, told how he had recently gone to the Nightlight service after registering as homeless with Cork City Council only to be told there were no places available and handed a blanket and sent back on to the street.

“The amount of stuff that goes on around the place, it makes you worse and then you’re battling your own demons. It’s just hard,” said Mr Dineen, adding that he and others were being put out on the street at a time when there were empty hotels in the city as a result of Covid-19.

“It was pure contradiction ‘Stay in, stay safe’ and then throwing us out, they didn’t put us up in hostels or B&Bs, or anywhere like that. There were two hotels, Jurys and the one next to it, they were empty, and there were five to 10 people sleeping in the doorways. It would make you sick.

“Every night the Penny Dinners [a Cork charity which provides meals to homeless people] were coming around, fair play to them, and Simon were handing out their dinners at the back of the Simon, there would be 10 or 15 people there eating their dinner off the floor.

He said he had never been offered a flat by Cork Simon in 13 years. Even though his case worker had told him that he would get a place within 12 months he doubted if he could survive on the streets for that long. “I don’t have the heart for it any more,” he said.

“I just need to get off the street. If I walk into the city council they’re just going to tell me to go to Nightlight, to walk around until 11 o’clock at night, it’s degrading,” he said, adding that when he was on the streets during the day, he and others were constantly being moved along by gardaí.

Contacted by The Irish Times about Mr Dineen’s criticisms of Cork Simon, a spokesman for the charity conceded that the service was far from ideal and that Covid-19 had indeed made the task of providing services for the homeless in Cork even more challenging.

“It opened at 11pm at night, it closed at 7.30am in the morning, people had to leave and the reason they had to leave was because it provides a day service – the doors open at 9am for people who are sleeping rough so they can come in and get a shower and a bite of breakfast and a change of clothes.

“We thought it would be a temporary measure, it was due to close at the end of April 2019 but it stayed in place and in that form because there was such a need for it but then when Covid-19 hit in the middle of March we had to reduce the capacity from 17 to 10 because of social distancing.”