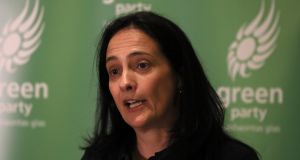 Minister for Sport Catherine Martin: ‘The current board of the FAI now has an opportunity to show strong leadership.’ Photograph: Brian Lawless/PA Wire

The Government has warned of “damaging” consequences for the Football Association of Ireland (FAI) if it does not impose reforms agreed during the State’s €30 million bailout of the organisation earlier this year.

The State has withheld the vast majority of funds agreed under the deal until it is voted through by an extraordinary general meeting of the FAI’s council.

However, some FAI board members have protested against elements of the deal, saying it risks disenfranchising the grassroots game and arguing it may not get the required 66 per cent majority vote needed to pass it at the egm.

Board members raised this at talks this week between the FAI board, Minister for Sport Catherine Martin and Minister of State Jack Chambers, along with their officials and senior figures from Sport Ireland.

Afterwards, however, Ministers reiterated their demands that agreed changes must be implemented before funds are released.

Following the meeting, the department said that if funding cannot be released, “the alternative will be extremely damaging for the FAI and its members”.

In a statement to The Irish Times, a spokesman for the department said the Ministers had told the FAI “they would not reopen for discussion any part of the [memorandum of understanding] agreed by the previous government”.

“The Ministers affirmed that no funding would be disbursed by the department or Sport Ireland to the association until progress was made on key outstanding issues in the memorandum.”

The contentious aspect of January’s bailout deal would give an effective majority to independent directors appointed to the board. The government is insisting on this, and, while it is supported by the FAI’s chairman and independent members of the board appointed since the organisation was gripped by controversy last year, other members are resisting the changes.

Under the deal, there would be an even split of board positions between elected and independent directors, with a casting vote for independent chairman Roy Barrett.

Mr Barrett, along with deputy chief executive and former Ireland striker Niall Quinn, had pushed forward ideas for reform from their self-styled “visionary group” from outside the organisation during the tenure of former chief executive John Delaney.

Sources said the meeting earlier this week was “robust” and “frank”, and while one source maintained it was “businesslike”, the source conceded that “people weren’t running off to send each other Christmas cards” afterwards.

Political sources are concerned that the clashes at FAI board level, and the resistance to implementing the deal, could derail the wider rescue programme. One source said that some elements at the association “seem to have forgotten how close they were to the cliff edge, and that they haven’t actually come back from the edge that much”.

In a statement, Ms Martin said it is “critically important” to move forward with the agreed changes “to restore public confidence in the FAI”.

“The current board of the FAI now has an opportunity to show strong leadership in delivering this change,” she said.

Mr Chambers said the FAI “needs to demonstrate to its members, Government and the general public that it is stepping up to deliver a strong new governance regime”.